Media Release: Whisky celebration to be toasted with Homecoming Beer 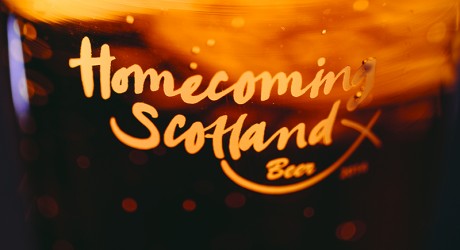 THE Scotch Malt Whisky Society, an international whisky club with over 26,000 members around the world and branches in 19 countries, will be rolling out a barrel of a different kind this May, and toasting its Whisky Month celebrations with the official Homecoming Scotland beer crafted by Inveralmond Brewery in Perth.

Their ‘A Hauf ‘n’ Hauf’ events are part of a series of celebrations being hosted by one of the world’s most prestigious whisky societies during Whisky Month.

It may be the only celebration in the countrywide programme of whisky related events to officially profile Scottish beer on the menu.

The beer and whisky tasting events will take place on Saturday 10th and Friday 23rd May in Leith and Edinburgh respectively, and members of the society will be served up a hearty supper alongside the official Homecoming Scotland beer, crafted by Inveralmond Brewery.

Guests will also have the chance to taste Inveralmond’s Ossian, their bestselling Golden Ale, and Sunburst, a Bohemian Pilsner and the first of their Inspiration Series which launched earlier in April in a live YouTube broadcast attended online by some of the country’s most prolific beer bloggers and writers.

Fergus Clark, managing director of The Inveralmond Brewery, commented: “It’s a real honour to be involved in Whisky Month, and we’re feeling very special that our Homecoming Beer has been selected by such a well-respected organisation.

“To have created a selection of beers that are to be profiled at an event that is, essentially, a celebration of one of Scotland’s most famous products, whisky, is quite an achievement.

“Craft beer is a growing movement, and it’s testimony to the quality of our Homecoming Scotland beer that it has passed the test to be present at one of the Scotch Malt Whisky Society’s events.”

For further information about The Inveralmond Brewery and for interviews please contact Tricia Fox on 07989 955039 or t.fox@volpa.co.uk

About The Scotch Malt Whisky Society:

About Homecoming 2014 and Whisky Month: