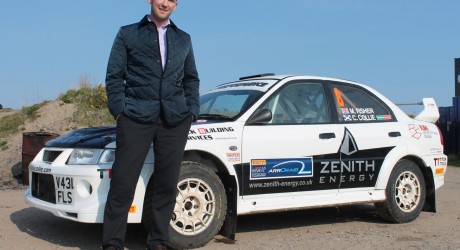 CHRIS Collie, who is a drilling engineer by day, is getting set for the biggest home rally event of year, as he prepares to take to the driving seat for the Granite City Rally this weekend.

Chris, from Portlethen, who first took up the sport in 2008, recorded his best-ever finish in the Scottish Rally Championship last year finishing eighth overall, with his biggest achievement at the Granite City Rally where he secured second place.

However, the remainder of his season was plagued with problems in each rally due to mechanical problems.

Nevertheless, his hard work and determination did not go unnoticed and he was awarded the Douglas Wood ‘Press on and Preserve’ trophy, which has made him even more motivated for this year.

He said: “I had a good start to the season last year, with a podium position at the Granite City Rally, but that was followed by a few problems meaning I didn’t finish where I wanted.

“I am really looking forward to this weekend, and hopefully it will all go smoothly on the day.

“It would be incredible to get on the podium again but it will be tough with so many great competitors taking part.

“There is a little extra pressure with thousands of rally fans in attendance, and so many people I know, but I just use that as motivation to do well.”

Chris, who works for Aberdeen-based well management firm Zenith Energy, which is sponsoring stage four at the rally, has spent the off season preparing his Mitsubishi Evo 6 with DMC Performance, to ensure it is ready to tackle the country roads and forest bends.

“You don’t really get the chance to practice so it is a case of getting behind the wheel and seeing what happens, so it is essential to ensure the car is in its best possible condition. I am heavily involved with rebuild of the car and looking forward to the adrenaline rush this weekend.

Chris who has improved his placing each year since taking up the sport has already shown promising results and has been recognised with various awards including the Colin McRae ‘if in doubt, flat out’ trophy in 2011, in recognition of his achievements and driving style. This year Chris is hoping to secure his best result yet.

“Over the years, I have gained an amazing amount of experience, and even the crashes have taught me some valuable lessons and skills to make me a better driver.

“I know this event is hugely competitively so I am just looking to go out and give it my best and hopefully I can gain some good positions this season, with my aim for top five placing in the championship.”