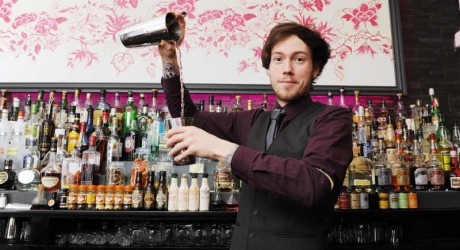 Alex, 23 and from Edinburgh, won the prestigious ‘Wanderlust Competition’ with a smooth drink called Lady Colombia, beating cocktail makers from The Ritz, The Dorchester and leading bars in Brighton and elsewhere.

As the competition was a brand awareness exercise run by La Hechicera Rum, a spirit only released into the UK market in 2012, Alex’s drink was based around a personification of Colombia, with each ingredient having an attribute that said something about the country.

He prepared a sophisticated mix of rum, Martini extra dry Vermouth, Mozart dark chocolate liqueur, maple syrup, and sea salt, and a blend of bitters for a panel of industry experts.

Alex says: “It is not just about the taste and drink itself, there’s a huge importance placed on what you say and how you look too.

“You’ve got to keep it smooth, keep your body at right angles when you pour things out. It always looks nice if you can make things flow.

“I had shaky hands but I had a few rums so that sorted it out; I was in shock after I won, though.”

The standard required to win the event is indicative of where the bar and hospitality sector is at today.

“I wouldn’t say it is quite like cooking but there is an immense amount of studying involved in cocktails now, and the industry takes itself seriously.

“You really do have to master every spirit, but also the small details of the cocktail experience like mood, lighting, does the customer have enough water, is the music right.”

For Orchid’s owner, Ben Iravani, Alex’s win is a win for Aberdeen.

Said Ben: “Alex wasn’t just representing us, he was representing the city too. When people think of hospitality we want them to think of Aberdeen.

“Our ambition is to get more drinks specialists to come to the city, and show them that it’s on a par with, if not better, than London.

“We’ve had some greats guys come through Orchid and be really successful in the drinks industry and Alex is a shining example of that.”

Alex’s win means he’s now promoting Aberdeen’s take on cocktail mixology in South America, with a sponsored month-long trip in August, teaching Columbian bartenders about their native brand, although plans for his return mean taking a break from the competition scene.

“I really want to focus on taking the bar further than it’s ever been before, so that we can push bartending not just in the North East but in the whole of the UK.”