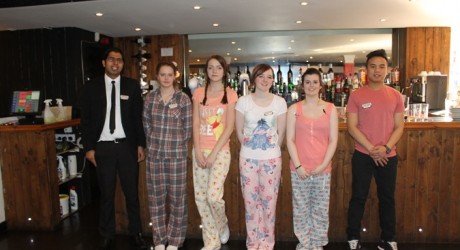 GENEROUS diners at Cook & Indi’s World Buffet restaurants have helped raise over £700 for Yorkhill Children’s Charity to help the families of sick children.

The enterprising restaurant chain decided to fundraise for Yorkhill Hospital by selling raffle tickets at £1 a strip with lots of prizes to be won. And all restaurant staff worked on Easter Sunday in their PJs, having been sponsored by family and friends for doing so!

The fundraising effort was organised by Stephanie Thomson, manager at the Johnstone restaurant, who said: “We managed to raise £712 for Yorkhill in less than one week, selling raffle tickets and offering great prizes, including Moet champagne, Easter hampers and gift vouchers that were all donated by Johnstone staff.

“Yorkhill Hospital does an amazing job every day by helping save the lives of many children – from birth to teenagers. Every penny helps towards the care for these young people and their families, so please help us out by donating to this fantastic cause.”

In addition to the funds raised for Yorkhill Children’s Charity, Cook & Indi’s World Buffet recently raised £9800 for the BBC Children in Need appeal and has plans in place to raise for for Cash for Kids in June.

As well as Johnstone, Cook & Indi’s World Buffet has outlets in Glasgow, Hamilton, Bishopbriggs and Darnley – with more opening soon.