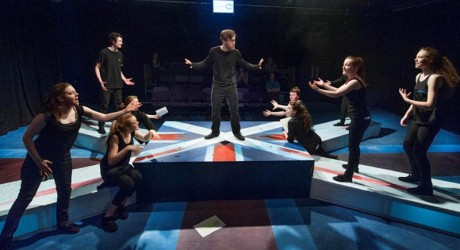 THERE is still time to apply for Scottish Youth Theatre’s Summer Festival for a chance to shine on stage.

Scottish Youth Theatre is seeking budding actors aged 12-25 to take part in Summer Festival 2014 in Dumfries and Galloway. This flagship national event brings together young drama enthusiasts from across the country to take part in courses ranging from performance to technical theatre.

Local boy, 18 year-old James Charlton from Moffat, who took part in last year’s Summer Festival, said: “I feel like Summer Festival really defined what I wanted to do in the future, which is becoming an actor. I loved working with such skilled people who supported me every step of the way. I made a whole bunch of new friends too.”

James held one of the leading parts in a sold out production about the Scottish Independence Referendum, with reviewers praising his performance and stage presence.

“I would definitely recommend Summer Festival to anyone who wants to find who they are and what they really want to do.”

Applications are now open. Young people can apply for Summer Festival 2014 and be part of a brand new production of J.M. Barrie’s Peter Pan by visiting www.scottishyouththeatre.org.

“Every summer, hundreds of young people who are passionate about theatre and performance take part. It gives young people a fantastic insight in to the thriving world of theatre and the opportunity to make friends with other young people their age with the same interests.”