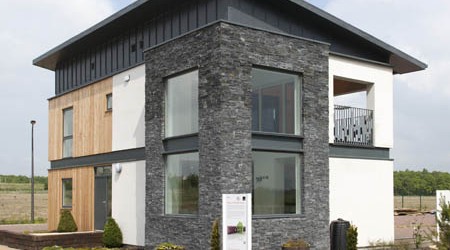 The Resource Efficient House, located at the BRE Innovation Park at Ravenscraig in Lanarkshire, is in the running for a prestigious national award

ON May 7 2014, the Resource Efficient House is a finalist at Green Build Awards 2014, in the Breakthrough Award category, which recognises any person/project which has raised the bar and done something different to achieve a low-energy and sustainable building.

The house, which was one of the first projects to be delivered by the Scottish Government’s Resource Efficient Scotland programme, managed by Zero Waste Scotland and built in partnership with Tigh Grian Ltd, was recently Highly Commended in the ‘Design through Innovation’ at the RICS Awards.

Director of BRE Scotland, Rufus Logan, says: “We are very proud to host the Resource Efficient house on the BRE Innovation Park and this recognition is wholly deserved as the property is chock-full of the innovation our small country is world-renowned for.

“This is evident in its design right down to the products, materials and technologies it incorporates.

“The learning from this project will be of huge benefit not only to Scotland and the rest of the UK but to countries around the world who are being challenged to build with fewer resources.”

The Resource Efficient House has already been recognised at the number of recent awards ceremonies where it won  both at the Sustainable Ireland Awards 2013 for ‘Sustainable Building Project of the Year’ and Timber in Construction Award 2013 for ‘Private House of the Year’.

Says a spokesperson: “The Resource Efficient Home demonstrates how the latest principles in resource efficiency and waste reduction can be applied in house building.

“Currently, an average three-bed home built in Scotland can produce as much as 13 tonnes of construction waste, costing up to £500 per unit.

“The Resource Efficient House produced less than five tonnes of construction waste, with less than one tonne going to landfill.

“As well as facilitating sustainable living for occupants, the design of the house will ensure maximum recycling and re-use of products at its end of life.”

The BRE Innovation Park opened in 2012, with the aim of trialling and testing new ideas from architects, developers and manufacturers before they were applied to real communities.

Since its launch, a visitor centre plus three innovative Homes for the Future have been developed.

Currently, a further four plots are at various stages of development, with the aim to see these start construction later this year.

Individuals, businesses and groups interested in visiting the properties at the BRE Innovation Park should contact Jackie Reilly at BRE on tel 01698 262193 or email reillyj@bre.co.uk