Media Release: Local entrepreneur takes the gamble to emerge as talent of the future 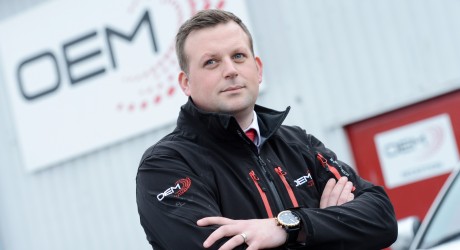 SOMETIMES, taking risks in the business world is the only way to succeed – and this is certainly true for one young Aberdeen entrepreneur.

Aged just 29, and two weeks before the birth of his second child, Barry Park took a huge gamble when he set up his own business, OEM Diesel Products.

Barry started his career as a deep-sea fisherman, before he went on to work as a service engineer. He then held a number of senior positions at large multinational companies in the oil industry.

Using the wealth of experience he had gained over the years in his varied roles, he made the brave decision to go it alone to establish the specialist firm, which provides engine services and spare parts procurement specifically for the oil and gas and marine services sector.

Obtaining private investment, rather than using the more conventional bank lending route paid off almost immediately when just a day after being in business, he secured his first client, an independent oil and gas producer.

As time progressed, more companies started to seek the support of OEM Diesel Products, with clients utilising the experience and dedication to delivery that is the culture of OEM.

Barry said: “It was a huge risk to set up OEM, which would be competing with well-established, multi-million pound companies in the industry; but also an even bigger opportunity which I had to pursue.

“My work as a deep-sea fisherman was a demanding job, which saw me working long hours and spending a lot of time away from family and friends, and this experience has laid the foundation for me to ensure OEM not only succeeds but importantly continues to perform higher than client’s expectations.”

In the early days, Barry worked from his parents’ home in Stonehaven, but it wasn’t long before his determination to succeed saw the business move to bigger premises in Newmacher, then onto their current base at the Kirkhill Industrial Estate in Dyce.

As OEM has grown, so too has its workforce. As a small company operating in a competitive market, there can be additional challenges associated with recruitment, but with hard work and commitment, OEM has developed a reputation that has attracted talented candidates from the industry and beyond.

During 2012 and 2013, Barry spent a considerable time away from home trying to gain as much exposure for the company as possible by attending customer meetings, conferences, exhibitions and carrying out presentations.

He said: “When I was at Amsterdam airport waiting to catch a flight in 2012, I bumped in to a potential client.

“As I didn’t want to miss a business opportunity, I put on my laptop and gave him a presentation there and then – and he has been a customer of OEM’s ever since.”

Barry’s hard work and dedication to succeed has certainly paid off, and just two years after establishing OEM, he has been named as a finalist in the prestigious Grampian Awards for Business Excellence 2014, in the Emerging Entrepreneur category.

“Being recognised in the awards shows that grasping the opportunity to establish OEM outweighed any initial risks.

“My main aim has always been to create an engineering company with longevity and a solid reputation in the industry.

“It’s vitally important to me and my colleagues that this is maintained as the company evolves, crucially providing a solid foundation to compete with others in this multi-billion industry.’’

The winners of the Grampian Awards for Business Excellence will be announced during a black-tie gala awards ceremony at the Mercure Aberdeen Ardoe House Hotel and Spa on Thursday 26 June 2014.