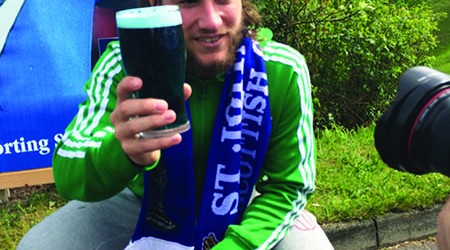 THE INVERALMOND Brewery in Perth has stuck its colours to the cask this week, joining a growing number of Perth businesses supporting their home football team St Johnstone’s forthcoming bid for the Scottish Cup, announcing the  creation of a BLUE beer to toast their achievement.

St Johnstone will face off against rivals, Dundee United, in the Scottish Cup final on 17th May at Celtic Park in Glasgow and football fever has gripped the city of Perth, as well as neighbouring city, Dundee, as fans have snapped up over 26,000 tickets to date.

The idea to develop something special to mark the occasion first came from Scott Findlay, the owner of the Cherrybank Inn, the flagship pub to stock the blue brew, who approached the brewery at the end of April with the request. With a fair few Saints supporters on-site, Inveralmond were only too happy to oblige.

The Saints 130 Ale, a 3.9% ABV Blue Ale, is immediately available to the on-trade in a limited run of nine-gallon casks only, and it is expected that a pint of Blue will be drunk at pubs around Perthshire on match day, 17th May.

Star striker, Stevie May, was ahead of the game this week, popping in to the Cherrybank Inn in Perth after training on Tuesday to make sure the first pint of the beautiful blue beer safely hit the back of the net.

The brewer behind the beer, Ken Duncan, in more than a nod to the 130 years Saints have waited to be in the Scottish Cup final, described his latest creation: “We wanted to create something more than just a generic pint to mark this memorable event, and we knew from the off we had to make it blue. This is a beer well worth the anticipation, tackling the senses with its zesty fruit aromas, inviting blueberry tang and a sensational finish like the one we’re all hoping for on 17th May.”

A cask of Saints 130 Ale will also be available at the Perth Beer Festival this weekend for those who wish to sample the beer prior to the cup final on Saturday 17thMay.

Fergus Clark, managing director of Inveralmond Brewery, commented: “This a magnificent occasion, and we’re thrilled to be one of the local businesses collaborating to celebrate this tremendous achievement. We will be backing St Johnstone all the way and we’ll be raising a pint of Saints 130 Ale to them on the day.”