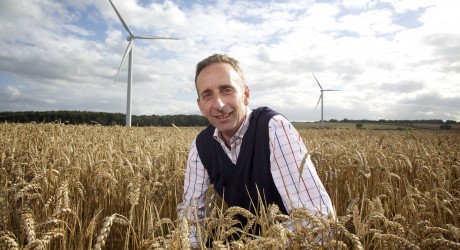 WIND energy company, Banks Renewables, has submitted a planning application to the Scottish Energy Consents Unit to create a community wind farm at Birneyknowe in the Scottish Borders.

The Hamilton-based company’s formal application is for up to 15 turbines at the site between Hawick and Bonchester Bridge, each up to 132m high. The site could generate up to 60MW of clean, green energy.

Banks Renewables has already consulted extensively with the council, local residents and Borders businesses to develop an innovative community benefits package proposal, which will ensure local people will see a host of benefits if the scheme is granted the go-ahead.

A share of the wind farm revenues, totaling up to £7.5million over 25 years, would be directed to the local community to be invested in the local priorities they identify.

That means the £300,000 a year fund could be used to set up jobs and skills initiatives, improve local facilities, support local groups and organisations or deliver community-based environmental projects.

Meanwhile, the construction phase would deliver a shot in the arm to local firms through Banks’ commitment to use local companies and contractors wherever possible.

Residents may also benefit from two pioneering new initiatives as part of the proposal. The Electricity Contribution Scheme would see those living closest to the site receiving a contribution towards their annual energy costs.

Meanwhile Banks Renewables has also proposed that a share of revenues could support an innovative new scheme to boost training and workplace learning, by helping local people break down the barriers they face in finding work, including transport and childcare issues.

Phil Dyke, development director at Banks Renewables, said: “After two years of intensive work and extensive consultation with local people, we believe we have now drawn up the best possible proposal.

“Our scheme has been carefully shaped by the feedback we received and is well-designed, sympathetic to the proposed setting and would deliver real, tangible and long-term benefits to the local community.

“By taking a community partnership approach we’ll ensure that if the wind farm is approved, it will have a hugely positive impact on communities surrounding the site for the 25-year life of the development.”

As part of the extensive relationship-building with the local community, Banks Renewables recently held a second round of public exhibitions in March 2014 to explain its proposals and to hear feedback. More than 100 residents attended to provide their feedback.

If approved, the wind farm would yield lucrative contracts, potentially worth millions of pounds, with local businesses being encouraged to tender for work ranging from construction and maintenance, ground works, quarry and building products, plant hire and haulage, waste solutions, fabrication, aggregates, utilities, professional services, hospitality and many more

Once operational it would also contribute up to £300,000 a year into a community fund, with local people deciding where the money should be invested. Similar projects delivered by Banks have resulted in job creation initiatives, provision of community infrastructure, delivery of major environmental projects and direct funding into community groups

Phil Dyke added: “We have made a deliberate effort over the last two years to involve local people extensively in the development process and have greatly appreciated the willingness of many local people to participate.

“Working closely with local people has given us an understanding of the issues they are concerned about, which includes the lack of job opportunities, access to apprenticeships and training for the unemployed.

“These are the issues that we are sure would be prioritised and addressed directly through the Birneyknowe Wind Farm Partnership.

“The local communities were also keen to see a mechanism which allowed the proposed wind farm to make a direct contribution towards individual fuel bills. This has been achieved, and the initial feedback is very positive.”

For more information about the Birneyknowe Wind Farm visit http://www.banksgroup.co.uk/birneyknowe.

Banks Renewables is part of the Banks Group (www.banksgroup.co.uk), a family firm founded in 1976, which now employs 420 people in the renewable energy, property and mining sectors. The company’s development with care approach underpins all its work, driving community consultation and environmental excellence.