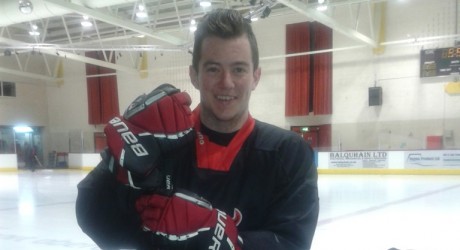 MEMBERS and supporters of Aberdeen’s premier ice hockey team are getting set to sport their finest attire during their first annual awards dinner dance.

The Aberdeen Lynx, who compete in the Scottish National League, will be hosting the awards dinner on Saturday 16 August at the Hilton Treetops, Aberdeen, to recognise the team’s effort during the last season.

The black tie ceremony will include a three-course dinner, guest speaker, DJ and entertainment from Team Challenge, along with a raffle and auction to raise funds for the club’s senior and junior teams.

Team captain for the Lynx, Jordan Leyden, said: “This will be the first awards event for the Lynx and we are really looking forward to celebrating the team’s achievements this year.

Although we had a mixed season, we managed to progress and develop as a team, so we think it is vital to recognise everybody’s efforts.

“We have also had amazing support from our fans with over 1,000 supporters watching at most home games, so we also want to invite them to join the celebrations on the night.

“The awards will also be a great morale boost for the team as we will start the next season in September.”

The Lynx, who play at the Linx Ice Arena on the beach promenade, has various sponsorship opportunities for the events, including the award categories, most valuable player, player’s player, most improved player, fan’s player, club member of the year and comedy moment of the season.

All money raised on the night will go towards the running of the club, including the youth development programmes and community initiatives.

Tickets for the event will be £50 per person or a table of ten can be bought for £500. Tables of 12 are also being offered, with the chance to dine with a player for £600.