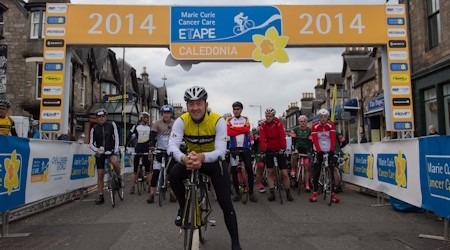 NEILL Kemp (37), from Torrance near Glasgow, has set a new course record for the hugely popular Marie Curie Cancer Care Etape Caledonia, arguably the UK’s premier closed road cycling sportive, that saw him overtake the efforts of cycling legend and Tour de France TV presenter, Chris Boardman, who lined up alongside 5,250 cyclists for the 81-mile ride.

Neill crossed the finish line in 3h 26 01s knocking a comfortable 1 minute 37 seconds off the top time set by pro rider, Evan Oliphant, in 2011 and a comfortable 23 minutes and 42 seconds off Boardman’s time for the course of 3h 49m 43s.

Neill, whose mother and father were on the finish line to see his triumph, was delighted with his time. He commented:

“Amazed by this, truly chuffed. It was a great ride, really smooth – enjoyed it very much.”

Eight weeks before the 2014 Tour starts in Yorkshire, Boardman, who has two Olympic medals to his name, also tackled the 81-mile closed road cycling event alongside over 5,250 other participants.

The ride gave him a great chance to experience pelotons, descents and hill climbing on the infamous ‘Schiehallion’.

He also had the opportunity to speak to the enthusiastic spectators and participants, who range from novice to club athletes that will no doubt help him when preparing for Tour de France 2014.

Finishing the event in 3h 49m 43s, the five times Tour de France competitor, Chris Boardman, commented: “It was great. The weather really helped – we always prepare for the worst and hope for the best when it comes to the weather in the Northern Hemisphere and this was as good as it gets.

Chris, who admitted yesterday he is also house hunting in the area, continued: “I also spotted a fair few houses for sale along the route and, crucially, one was only about a mile from the local pub. Watch this space!”

The sports presenter was joined by former rugby union player and Scotland International, Rob Wainwright, who rode alongside a team of 24 riders, many of whom were fundraising for Official Charity Partner, Marie Curie Cancer Care.

He said: “I did the event last year and really enjoyed it so I had to come back with the team.

“The scenery in this part of the world is incredible and it’s an amazing ride when you get a little luck with the weather. Lots of the guys are raising money for Marie Curie Cancer Care and it’s great to see so many people contributing to such a great cause.”

Marie Curie Cancer Care is the official charity partner of the Etape Series. Etape Caledonia and Etape Pennines both encourage participants to raise vital funds which enable Marie Curie Nurses to provide free nursing care and support to terminally-ill people and their families in communities across the UK.

Prospective participants for the 2015 Marie Curie Cancer Care Etape Caledonia will be able to register their interest immediately following the 2014 event.

Those who register will get an exclusive 24-hour window to enter the event when places go on sale later this year and, with general entries selling out in just eight hours this year, those 24 hours could make all the difference to those budding cyclists hoping to take on the 81-mile cycling challenge.