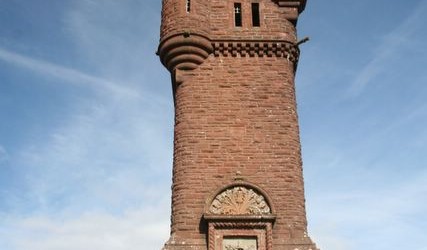 CONSERVATION experts from Bell Ingram are leading a campaign to restore a significant national landmark that requires urgent remedial works to secure its future.

The Airlie Monument – situated on Tulloch Hill on the lower reaches of Glen Clova and Glen Prosen at Cortachy north of Kirriemuir – was erected in memory of the 9th Earl of Airlie, who was killed in the Boer War in 1900.

However, the 65ft-high monument is suffering from erosion around the base and significant water penetration and remedial works are urgently required to prevent further damage to the building.

Bell Ingram, who have considerable experience in restoration projects, are now aiming to secure funding to restore the monument to its former glory and, importantly, to allow public access which has been restricted to date due to the poor condition of the structure.

There are also plans to convert one of the rooms as a Boer War visitor interpretation centre.

Following on from the success of the Webster Memorial Theatre and the Brechin Townscape Heritage Initiative (THI) projects, the Bell Ingram team were motivated to begin work on the Airlie Monument which would be expected to last six months.

The team from Bell Ingram’s Forfar office, lead by Director Susan Burness, estimate the repairs as in excess of £150,000 and have approached Historic Scotland and hope to access funding through grant assistance available to war memorials to try to obtain the necessary financial support.

Susan Burness, who was recognised by the Royal Incorporation of Architects in Scotland for her passion and skills as an architect said: “It is important to both Bell Ingram and the local community that the Airlie Monument is restored to its original state.

“The building is an important landmark for both locals and visitors and we want to ensure that they have full access to the building once again.

“Bell Ingram have handled many complex and difficult projects such as this with great success in the past and we are sure that we have the capability to restore the monument to its former state.

“We are working hard to ensure that we gain funding for the project as our main priority secure the future of the monument which is in particularly bad condition.

“The monument was erected to commemorate the death of Lord Lieutenant-Colonel David William Stanley Ogilvy, the 9th Earl of Airlie who was killed at the battle of Diamond Hill, near Pretoria on 11th June 1900 whilst commanding 12th (the Prince of Wales Royal) Lancers.

“It was originally proposed that the structure, with its small projecting tower at the top, would be used on occasions of national or estate rejoicing.

“The monument is also a popular destination with walkers providing spectacular views of the Angus Glens countryside.

“Despite previous roof repairs, the building is not wind or water tight and significant water penetration is now evident within the building.”

The proposal by Bell Ingram would once again allow the building to be used for both recreational and educational purposes. The small room below the signal tower would be used as a display and interpretation centre which would seek to increase public knowledge of the Boer War.

To find out more about the range of services Bell Ingram offer visit www.bellingram.co.uk.

To see the more press releases, visit our website.