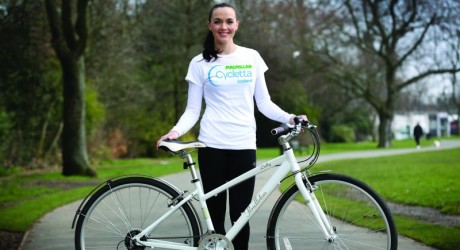 FROM a New Year’s resolution of ‘Less Wine, More Cycling’ just two years ago, Scottish woman, Sarah Doran (41) from Coatbridge in North Lanarkshire, has not only realised her goals to get fit and raise money for Macmillan Cancer Support, but has also gained the privilege of meeting one of cycling’s greatest sporting women, Olympian Victoria Pendleton CBE.

One of just five inspirational women selected from across the UK, and solely representing Scotland, Sarah made her way down to a VIP event in London today, to meet the triple Olympic medallist in recognition of her own personal cycling and fundraising efforts at Scotland’s first event Cycletta event which was held in Perthshire in 2013.

Sarah commented: “I’d always wanted to do Cycletta so when I saw it was launching in Scotland last year I signed up immediately. I’d done a bit of cycling to work, and a little bit of road cycling, but Cycletta was the perfect opportunity for me to push myself a little bit more, see some of Scotland’s magnificent countryside and really get fitter.”

Stating that her new year’s resolution for 2013 was as simple as ‘less wine, more cycling!’, the decision to take part in the women only cycling event also became a personal fundraising challenge for Sarah, who works for Tesco Bank in Glasgow.

“My mum was diagnosed with cancer in 2009 and Macmillan Cancer Support were such a tremendous help to her and our whole family when she was ill, this was my opportunity to give something back.

“Mum has since fought off cancer twice and she’s a real inspiration to me. I’ve got my training plan and tips, thanks to the Cycletta website, and I just can’t wait to get started on both the fundraising and the training for this year’s second Scottish event in October.”

Adds a spokesperson: “With over 1.2 million Scots owning a bicycle, and only 18 per cent of them estimated to use it regularly, Cycletta was designed with the novice female cyclist in mind and the take up on places in 2013 saw almost 700 women take to the roads on two wheels, many of them raising money for the title charity Macmillan Cancer Support, and firmly placing Cycletta’s Scottish event as the second biggest in the UK.”

Backed by Olympic Gold medallist Victoria Pendleton (CBE), and supported by Spice Girls’ Melanie C, there’s no shortage of girl power to pedal this series to success and Pendleton was on hand today to give her tips to Sarah on how to get the most out of her training:

“Events like Cycletta definitely encourage women to get on their bikes – there’s a special feeling to a women only event that is supportive, less competitive and much more enjoyable and approachable than other general sporting events.

“Even now I’ve retired, I know if I want to feel good and remain fit, then I need to pitch in with some regular exercise. Training for an event like Cycletta provides a focus, a goal, and the discipline we sometimes need to be successful. I love the discipline of training. It’s really inspiring to meet people like Sarah who have made the effort, not just to embrace the sport, but to help others through charitable fundraising.”

Pendleton is on a mission to encourage as many people into cycling as possible and, as Ambassador for the Series, she believes Macmillan Cycletta is the perfect two wheeled vehicle for pushing forward this message of the sport’s inclusiveness.

Macmillan Cycletta Scotland is open to ladies aged 12 and upwards and includes different distances starting from just 20km to 100km. They also have a bike hire option so there’s not even a requirement to own your own bike.

Girls aged between 12 and 16 can also take part when accompanied by an adult, making it perfect for mother and daughter teams to participate, as well as Secondary school pupils, and even Girl Guide troops.

The key message that organisers want to get across is that the event is open to all women, young and old, with or without a bike, beginner or enthusiast.

To register for Macmillan Cycletta Scotland which takes place on Sunday 5th October at Scone Palace near Perth, visit: www.humanrace.co.uk/cycletta

Check out too the brand new twitter.com/allCharitiesPR.