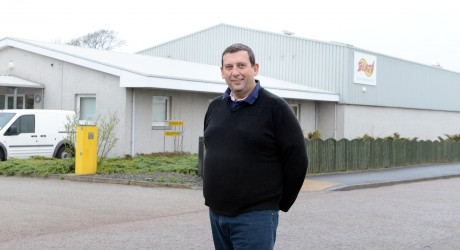 Blaze Manufacturing Solutions, which was launched in 2006 by Howard and Ann Johnson, has moved from its base on the outskirts of Stonehaven to a new site, which is situated in over an acre of land in the Laurencekirk Business Park.

The company, which works with major oil and gas operators to design and supply fire protection systems and loss prevention services, has invested half a million pounds in the offices, which span almost 13,000sq ft internally, and are double the size of its former premises.

Blaze House is home to 30 members of staff and 100 contractors. Design and engineering teams, procurement, business support and workshop facilities are all located at the new base.

The company is also investing £30,000 a year in new offices in Kemnay, near Inverurie, Aberdeenshire, which will focus on specialist environmental engineering. Eight new members of staff, including general manager, Bill Cunningham, will be based at the site.

The company, which was set up to serve clients in the Brownfield market, also has a regional office in Great Yarmouth to cope with demand from southern North Sea operations and a southern sales office in Milton Keynes.

The firm operates predominantly in the oil and gas sector working directly with end users and contractors.

Blaze Manufacturing Solutions managing director, Howard Johnson, said: “Blaze has had an extremely strong start to 2014, securing a number of new contracts, which is highly rewarding for the company.

“It was essential for us to relocate our headquarters to a bigger base to ensure we can cope with demand from our clients.

“The new Kemnay office will also allow us to focus on our specialist environmental engineering services which will take Blaze into a complementary service industry associated with the control and management of hazardous areas and module integrity.”

The specialist firm, which is a finalist in the Grampian Awards for Business Excellence 2014, in the Business Success Over Three Years category, is experienced in all types of fire protection systems on numerous installations including offshore production platforms, drill rigs, floating production units, onshore oil fields, terminals, refineries and petrochemical plants.