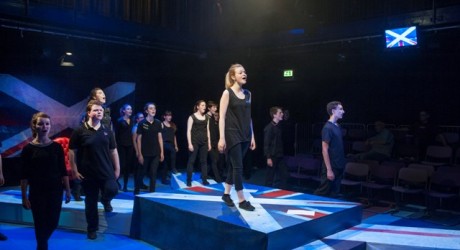 SIXTEEN and 17 year-old first-time voters are taking a new version of Scottish Youth Theatre’s Now’s The Hour, a show which explores young people’s attitudes to the Independence Referendum, to the Edinburgh Festival Fringe this Summer.

Now’s The Hour is a funny, fast-moving, emotional roller-coaster of a show that uses sketches, monologues and music to explore young people’s attitudes to the Referendum and what it could mean for all their futures.

With a cast of 12, comprised entirely of teenagers who will be voting for the first time in the referendum, this play represents the authentic voice of a cross section of young Scots as they try to make sense of the claims and counter-claims, the politicking and the propaganda.

The cast members come from across Scotland: Fife, Orkney, Aberdeenshire, Glasgow and Edinburgh.

Why authentic? Because this show hasn’t been pre-written by a bunch of jaded, cynical adults, but instead is devised during the rehearsal period by this company of young people, around a structure which has proved itself, in two previous productions, to be more than capable of delivering theatre that is entertaining, insightful, and thought-provoking.

Fraser MacLeod, the show’s director, said: “During the devising, the cast is asked to write a letter to their future selves 20 years from now, to express their great good hopes and their worst of fears, both for themselves and for their country.

“Out of the journey that follows they examine what it means to be Scottish, they satirise stereotypes, pose the questions that most disturb them, reflect on the history that led us to this place, and turn a spotlight on topics like currency, borders, Trident and much more before finally expressing their hopes for the future.”

Mary McCluskey, Scottish Youth Theatre’s chief executive and artistic director, added: “Now’s The Hour is a must see show for anyone who wants to hear the voices of the young people, who will have to live the longest with the consequences of the big decision this September, and who cares about what they have to say.

“When we first developed Now’s the Hour, last year, as part of our Summer Festival, we had no idea it would generate so much interest. Being part of the Fringe demonstrates the important role Scottish Youth Theatre has in unlocking the creative potential, confidence and development of children and young people right across  Scotland.”

Elaine C Smith, actress and Scottish Youth Theatre patron, said: “Interesting, thought-provoking, well directed and produced… A lot of good talented youngsters in there and a credit to SYT and Scotland.”

Now’s The Hour will run from Friday 1 August to Sunday 24 August at the Stand Comedy Club, York Place, Edinburgh.

This summer Scottish Youth Theatre is also holding Performance Courses in Dumfries, Aberdeen, Glasgow and Edinburgh for young people who are interested in getting experience in theatre and the performing arts.

In association with the National Theatre of Scotland, Scottish Youth Theatre will also participate in The Tin Forest in July, a major celebration of Glasgow’s industrial past and creative future. This will involve young actors from countries around the Commonwealth performing street theatre across the city.

Now’s the Hour first presented as part of Scottish Youth Theatre’s Summer Festival 2013, followed by a performance in the Scottish Parliament as part of the Festival in Politics in August 2013. During December 2013-January 2014, a redevelopment of Now’s The Hour was produced in collaboration with BBC Scotland, with a new cast of young people. It was aired in April 2014 on BBC TWO.

Check out too the brand new twitter.com/allTheatrePR.