Media Release: A book to build a future with – big thinking for small nations, book launch 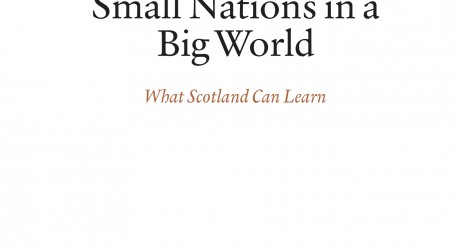 The question on the ballot is, in appearance, simple and clear: Should Scotland be an independent country? Yet, while the words may be admirably concise, the deeper meaning and implications are not. – From the introduction to Small Nations in a Big World

Scotland could be made to work as an independent state but this implies not merely a change to its external relations or formal status, but a rebuilding of its institutions internally. We know from the example of other small states that this requires bold decisions and hard choices. – From Small Nations in a Big World

“INDEPENDENCE means that Scotland’s future will be in our own hands”, according to Scotland’s Future, the Scottish Government’s ‘White Paper’ on independence.

Explains a spokesperson: “It is not so simple, according to Michael Keating and Malcolm Harvey. In Small Nations in a Big World: What Scotland Can Learn, they show that, in a globalised world, being formally independent ‘does not mean that a nation is fully in command of its own destiny’.

“Looking at the experience of small European states, including the Nordic countries, the Baltic States and Ireland, the authors identify two models.

“In the social investment model, they see public expenditure and services as a contribution to the productive economy.

“Scotland has often looked to the Nordic social democracies for inspiration. Keating and Harvey show that it could imitate their success but this would require a radical overhaul of its way of making policy.

“The book raises issues that will remain crucial to the future of the nation whatever the outcome of the vote in September.”

Small Nations in a Big World is a publication from the Scottish Centre on Constitutional Change, which continues its programme on the economic, political, social and security implications of independence or further devolution.

He has been writing about Scottish politics for 40 years and is published extensively on nationalism and territorial politics throughout Europe.

MALCOLM HARVEY is a researcher at the University of Aberdeen and the Scottish Centre on Constitutional Change. His research interests include nationalist movements, party systems and constitutional change. He has written online for The Herald and Better Nation, a political website he co-founded.

All welcome. Admission free but ticketed. To book to attend, please phone 0131 225 4326, e-mail events@luath.co.uk, or go to http://smallnations.eventbrite.co.uk