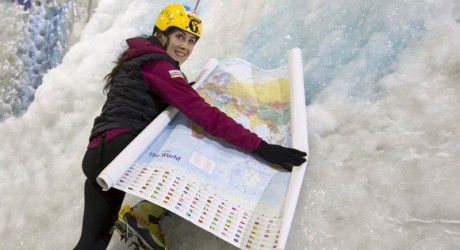 SHONA Thomson is the only Scotswoman and one of only 20 females in the world to have completed Marathons on all seven continents.

Now Shona has hopes of scaling new heights as she revealed one of her ambitions is to climb the highest mountains in all seven continents of the world.

And, yesterday, Shona got some climbing practice in when she tried out the Snow Factor Ice Wall, in the Soar at intu Braehead entertainment destination.

Shona will be at Soar on Thursday night (May 22) to give a talk – organised by one of her sponsors Ellis Brigham – onher achievements, future challenges and the reasons for quitting her highly-paid job in the City to become a full time endurance athlete, marathon mentor and coach.

She’s being joined for the talk by her trainer, David Arnot, who will give tips on building strength for tackling endurance events focusing on nutrition as a key element of any training programme.

Shona said: “After resting up following my North Pole Marathon, which was one of the hardest races I have ever completed, I’m now looking for other challenges.

“And one of those challenges could very well be climbing the Seven Summits, which are the highest peaks on each of the seven continents.

Shona added: “I’m looking forward to coming home to Scotland and meeting people who want to take part in endurance running. And, hopefully, what both David and I have to say will help them achieve their ambitions.

“And even if people don’t want to go as far as running marathons, I would encourage them to lead a more active lifestyle and take part in some kind of sporting activity.”

Proceeds from the talk at Soar will go to Shona’s nominated charity, Dame Kelly Holmes Legacy Trust and the 5X50 Challenge, which encourages people to run, walk, jog or cycle five kilometres – or a 30-minute exercise equivalent – every day for 50 days with the aim of changing exercise habits for a lifetime.

Operations manager for Soar at intu Braehead, Ian Anderson, said: “Shona is an amazing woman and we’re looking forward to hearing about how she has managed to achieve so much as an athlete, completing marathons in the most harsh conditions.”

Log on to http://www.ellis-brigham.com/advice-inspiration/blogs/adventures-of-endurance-talks for more information and to book tickets for Shona’s talk.

Check out too the brand new www.twitter.com/allSportsPR.