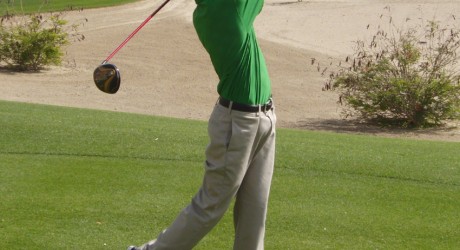 ONE of Europe’s hottest young golfing talents has spoken of the importance of competitive junior tournament golf to foster the next generation of stars in the game.

Dominic Foos, who scored his first major success when he won back to back U.S. Kids Golf European Championship titles in 2010 and 2011, is expected to burst onto the professional tour in the next few years.

The 16 year-old German carded a phenomenal -10 to take joint 16th at the Qatar Masters in January, just six shots back from eventual winner Sergio Garcia. The result would have netted Dominic a cool 23,000 Euros had he not been playing as an amateur.

In 2012, he became the youngest golfer ever to break into the top 150 in the World Amateur Golf Rankings and the top 40 in Europe. He also became the youngest-ever golfer to reach the top 40 of a European Tour event at the Nelson Mandela championships, aged just 15, and played with Rory McIlroy in a Pro-Am in Turkey.

Now, with 2014 U.S. Kids Golf European Championships only days away, Dominic has spoken of the impact the tournament had on his fledgling career and encouraged all the young participants to soak up all they can from the fantastic event.

He said: “The European Championships in East Lothian was the first time I played in Scotland. I love the courses over there as they are extremely challenging, so it was great experience for me.

“There is also a fantastic atmosphere. I made a lot of friends at the tournament and we’re still in contact, which I think is quite important for a young player. I’d definitely recommend it to any young golfer and would like to say good luck to everyone who is competing this year.”

More than 560 young golfers from across the globe have signed up for this year’s tournament held at five East Lothian courses from May 27-29.

The competition is organised by the U.S. Kids Golf Foundation to give children an opportunity to learn and play golf and to forge new friendships, and challenge each other for the European Champion titles in various age groups.

The top finishers in each category will compete in the Van Horn Cup over Luffness New on May 30 – a showpiece event, modelled on the Ryder Cup, where the best Western European players are matched up against the top golfers from the rest of the world.

The top five finishers in each age and gender group also automatically receive an invitation to the U.S. Kids Golf World Championship at Pinehurst Golf Club, North Carolina, in August.

In 2011, Dominic won the boys 13 boys category by a massive 11 strokes, shooting five under par. He was rewarded with a year’s membership of Gullane Golf Club.

His victory in 2010 was just as impressive, finishing nine shots clear at -7. Dominic also went onto represent Europe in the Van Horn Cup foursomes, winning his doubles match and a point for the European team.

He continued: “The tournament gave me the chance to compete on an international stage from a very young age, which was a fantastic experience and helped me develop my game.

“My goal is to make it to the top of world golf and although I have a long, long way to go, the experience I’ve gained at all the various junior tournaments has been absolutely vital.”

With golf mad dad, Sam, as his mentor and coach, Dominic started swinging a club before he was three. By the time he was 12, he was a scratch golfer and shot three holes-in-one in the space of a year.

He is currently ranked number 11 amateur in Europe and No. 1 in the under 17 category.

This year, Dominic will be hoping to make it back into the Junior Ryder Cup team, following his debut last time out in 2012.

The event takes place in Blairgowrie, Perthshire in September, on the eve of the worldwide professional tournament at Gleneagles.

The U.S. Kids Golf Foundation, a Georgia non-profit recognized as a 501(c)(3) charity, was created in 2001 and provides services that include competition and instruction. The Foundation organises more than 750 golf tournaments for kids each year with over 10,000 individual players ages 5-18.  These tournaments include Local Tours in more than 50 cities, ten qualifiers across the nation, seven regional championships, a European and Malaysia Championships and the U.S. Kids Golf World Championship and Teen World Championship, which are held each year in Pinehurst, N.C.

U.S. Kids Golf, LLC is based in Atlanta and manufactures equipment and related golf products designed for kids. It was created in 1997 when founder/CEO, Dan Van Horn, found that his children were losing their interest in golf due to not having the proper equipment. In addition to more than 4,000 golf shops and retail locations in the United States, the company’s products also are available in over 75 countries worldwide.