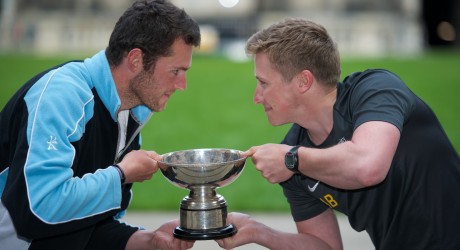 INTER-city rivalry will be at its fiercest peak this weekend as Edinburgh and Glasgow’s elite university rowers take to the River Clyde to compete for this year’s Scottish Boat Race on Saturday (24 May).

The crews have just been announced (see full list in notes to editors) for the 2014 spectacle and with both universities having employed a full-time director (Andy Barton, Glasgow) and head of rowing (Colin Williamson, Edinburgh) over the past year, crowds can expect a high standard of competition and quality performances across the day’s six main races.

The main race course runs from Broomielaw Quay to the grandstand finish at the Riverside Museum, with races, including men’s and women’s reserve and alumni contests, commencing at 11.20am before the universities’ elite crews take to the water for the Scottish Boat Races at 12.30pm (women) and 12.50pm (men).

Despite being nearly 140 years old, rivalry around the race has not subsided and each year sees two of the country’s leading sporting universities vying to take home the prize.

In the men’s main event, Glasgow has dominated the last 15 years with 13 wins in a row from 1999. However, Edinburgh stormed to victory in last year’s race and will be hoping to build a similar run.

Speaking of this year’s contest, Andy Barton, director of Rowing at the University of Glasgow, said: “The Scottish Boat Race is a fantastic concept and is an excellent opportunity to raise awareness of the sport in this country.

“One of the best things as well, is that it’s not just a group of students getting together for a laugh, it is a very intense day of high-level competition with some brilliant athletes on show.

“With both myself and Colin in post, this year’s race will be the highest standard yet, with the rowing programmes at both universities seeing a marked improvement in performance over the last year.

“This has been demonstrated by the fact that both teams have had crew members, who are competing in Saturday’s race, at the final stages of Great Britain squad trials.

“Although I wasn’t involved in last year’s Scottish Boat Race, I know it was a tough defeat for our guys and they have been training unbelievably hard to try and set the record straight this time around.”

Colin Williamson, University of Edinburgh’s head of Rowing, agrees the race is progressing and the level of competition continues to improve.

He said: “This will be my first involvement with the Scottish Boat Race, but I have followed previous results with interest and there appears to be a noticeable rise in standards over the past few years, with both universities having fully embraced their rowing programmes and provided additional support.

“We have had an excellent year with our Men’s crews, a young bunch of athletes who have really embraced the new regime and are starting to challenge the top universities in the UK.

“Although evidence from the season so far suggests we will be favourites for the men’s races, the women’s races are going to be tight.

“Glasgow have a couple of experienced Scottish Internationals in their crew, but I have been very pleased with how our girls have progressed over the season, with none of them having rowed for more than two years.

“It is great to be rowing in the heart of Glasgow. Rowing may not be in the Commonwealth Games, but there is a real buzz about the city at the moment and we are keen that this race becomes part of the sporting landscape.”

As well as the on-water action, this year’s event is offering a great day out for the family, with a Rowing Awareness Festival being held at the Riverside Museum from 10am – 2pm.

The free event will provide opportunities for members of the public to learn more about the sport and try their hand at some on-land rowing.

There will also be other family-friendly activities available, including face-painting, segways, treetreck and twizy train (for under five’s). On-site catering units will also be present on the day.

Having been running since 1877, the Scottish Boat Race is the third oldest boat race in the world behind only the famous Oxbridge contest and Harvard-Yale Regatta in America.

Please note this may be subject to change, depending on tide levels and weather conditions.