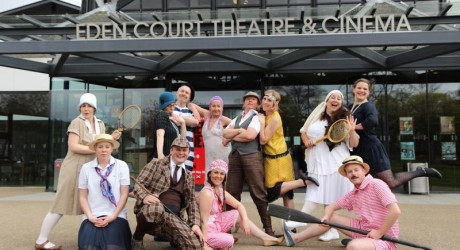 Get a wiggle on and join the Eden Court Commonwealth Flashmob Relay – spiffingly good sporting fun!

WITH their new promo video, Eden Court Theatre’s CREATIVE department are launching a flashmob relay this summer as part of the Games for Scotland programme running up to Glasgow 2014 Commonwealth Games.

The video, which went live on their website this week, shows a 1920’s sports-themed dance routine inspired by the 17 Commonwealth Sports.

Take a look for yourself:

The idea is to get as many people of all ages from around the Highlands and beyond to be part of the fun.

Learn the dance, teach your friends, share with your local groups and post their own videos of the routine online using the hashtag ‘#CREATIVEflashmob’.

There will be several live flashmob performances along the Queen’s Baton Relay route in June and people are also encouraged to come along if they can and join in.

The Commonwealth Flashmob Relay is delivered by Eden Court CREATIVE and is part of the Games for Scotland programme of events, which in 2014 celebrate the Queen’s Baton Relay and Scotland’s role as host of the XX Commonwealth Games.

This programme is delivered by Event Scotland and is a key part of Legacy 2014. #Legacy2014

“The XX Commonwealth Games are fast approaching and, as we gear up to what will be the best Games ever, I am delighted that the Games for Scotland programme is going strong, encouraging communities across the country to feel part of the excitement that is building around the event.

“The programme, which is part of our Legacy 2014 pledge, has already inspired thousands of people in Scotland to take part in sport and cultural activities. We are showing the world that we are a nation proud of our culture and diversity – and that this legacy will continue long after the closing ceremony of the Games at Hampden Park.”

“We are delighted to be working with The Highland Council to deliver an inspiring and motivating event, building excitement in the run up to the Games.

“The Games for Scotland programme has been spreading the message of the Games around Scotland’s communities since 2010 and has proved to be hugely popular.

“The diverse programme of sport and dance events, which this year additionally celebrate the arrival of the Queen’s Baton Relay, extend the legacy of the Games beyond the host city to benefit communities throughout Scotland.

‘The Queen’s Baton Relay is an opportunity for thousands of people across Scotland to join the celebrations of the Glasgow 2014 Commonwealth Games.

“By cheering on batonbearers and joining the events and activities in their communities, people up and down the nation will be taking part in a unique moment, one that will be remembered for years to come.”