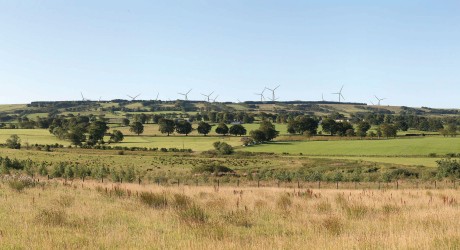 BANKS Renewables has been given the go-ahead to build a 26 turbine wind farm in South Lanarkshire.

Now Fergus Ewing, Minister for Energy, Enterprise and Tourism has given approval to the scheme, which had also been supported by South Lanarkshire Council.

Colin Anderson, director of Banks Renewables in Hamilton, said: “We are pleased that our partnership approach to developing the project has now got Scottish Government approval, after securing widespread support within the local area.

“That partnership approach will bring real, substantial benefits to the community for generations to come. Millions of pounds in wind farm revenues will be available for the local communities to invest in the projects, groups and worthwhile causes most important to them.

“Opportunities will be available to local businesses throughout the construction phase, creating local job opportunities.

“However, what we are most proud of is our work with South Lanarkshire Council to ensure a portion of the wind farm revenues will be ring fenced to fund a jobs and training initiative which will help many young people into long term employment.”

Colin praised the council for its forward-thinking attitude and willingness to work in partnership to ensure any development would benefit the people living and working closest to the proposed site.

He added: “That positive approach from the council has made a huge difference. We are also extremely grateful to all of the communities for working with us during the consultation over the past three years.”

The 104MW wind farm will generate a community benefit fund of an estimated £11 million during its 25 year lifetime. That money will help fund the long term development plans drawn up by Community Councils in Lesmahagow, Stonehouse, Strathaven and Sandford & Upper Avondale.

In announcing the go-ahead for Kype Muir, Energy Minister, Fergus Ewing, said it would save thousands of tonnes of CO2 each year, while producing enough energy to power 49,000 homes.

He added: “The Kype Muir wind farm will create jobs both in its construction and during its lifetime.

“Wind farms, like Kype Muir, provide considerable benefits to their local community and play an important part in helping Scotland reach its target of the equivalent of 100 per cent of electricity demand generated from renewables.”

Banks Renewables is part of the Banks Group (www.banksgroup.co.uk), a family firm founded in 1976, which now employs 420 people in the renewable energy, property and mining sectors. The company’s development with care approach underpins all community consultation and ensures environmental excellence.