Media Release: Scotland may be about to vote on independence, but in Glasgow the ‘pies’ had it 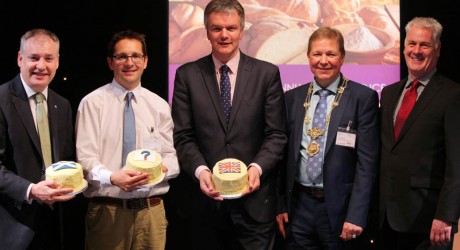 UNDER the banner, ‘Craft Bakery – the future in our hands’, bakers from up and down the land came together in Glasgow this weekend to debate the future of this vital high street bell weather and to crown the third Scottish Baker of the Year.

Tackling the key issue of the day, Michael Moore MP, former Secretary of State for Scotland, spoke about Scottish independence followed by Richard Lochhead MSP, Cabinet Secretary for Rural Affairs and the Environment, who also shared his views.

Mr Lochhead commented: “Independence offers a wealth of opportunity for Scotland and an unprecedented platform to promote the Scottish brand delivering huge benefits for our bakers and wider food and drink sector.

“A vote for independence will provide our Parliament with the full powers of independence allowing us to focus on supporting food and drink growth like never before.

“After all, food and drink is a national priority and a pillar of Scotland’s economy.

“Scotland’s overseas food and beverages exports are five times as important economically to the Scottish economy than for the UK as a whole.

“Likewise, food and drink manufacturing is also more than twice as important to output in the Scottish economy than for the UK economy.”

Mr Moore explained: “The Scottish Bakers’ conference underlined the contribution that the sector makes to Scotland’s economy. The strength of the food and drink industry is something we can all be proud of and Scotland’s bakers are more than playing their part.”

The Question Time-style panel on Scottish independence, chaired by James Withers, CEO of Scotland Food and Drink, saw Mr Lochhead and Mr Moore taking questions from the floor, which threw up a range of issues from the effect on the Scottish economy for both small and large business to employment issues, currency, export issues and Scotland’s influence on the world.

On a different note, Mich Turner MBE and Peter Sidwell, the judges from ITV’s Britain’s Best Bakery, talked about their experiences as TV judges.

They encouraged bakers to build their brand and to promote their ‘hero’ products and to give their customers real high quality products that are ‘worth walking over hot coals for’.

Aussie baker and motivational speaker, Tom O’Toole from the Beechworth Bakery, flew in presenting a fresh approach to managing a business which left many inspired and motivated to try something new.

“People tell me ‘if I train them they will leave’ to which I say ‘what if you don’t train ‘em and they stay’,” jokes Tom, who is passionate about bakery business and who’s company is known as the greatest bakery in Australia.

“When I have a problem in my business, I just look in the mirror, simple as that.”

Les McKeown’s legendary Bay City Rollers provided a star turn on the Friday night, entertaining the crowds with all their hits.

It certainly was ‘Pie Pie Baby’ as the bakers sang ‘shang-alang’ in good voice before queuing up for photos with the pop legend and celebrity judge from this year’s World Scotch Pie Championships.

The weekend culminated in the Scottish Baker of The Year National Awards presentation by Mich Turner of Little Venice Cake Company. The glittering black tie event saw Mich crown Ashers of Nairn as the third-ever Scottish Baker of the year.

“The company is one of the leading retail bakers in the north of Scotland and we are proud to be a long-established family concern, we take our business very seriously.

“We use traditional methods and craftsmen’s skills and the brand is steeped in valuable heritage. But we could not have come this far in the competition without our dedicated and skilled team and without the votes of all of our customers, Thank you.”

2013 winner, Andre Sarafilovic, of craft bakery and family-owned business, Stephens Bakery, said: “Since winning, our business has gone from strength to strength so it’s a huge boost to be crowned champion and we wish Ashers well for this year.”

“The bakery sector is a true bell-weather operating as it does at the heart of our towns and cities and it is timely that this weekend we have taken a long hard look at how we can continue to contribute to the economy of Scotland,” said Alan Clarke, chief executive of Scottish Bakers.

“As always we have seen the best our industry has to offer, celebrated our success and enjoyed each other’s company in true Scottish style,” said new president, John Gall.

“But now it’s down to the business of determining the future of our nation as we continue to supply its daily bakery products.”

With thanks to all of our sponsors and exhibitors especially our Conference and Awards Partner Bako Northern and Scotland; our Gold Sponsors: Bakels, California Raisins, Carrs Flour Scotland, Clydesdale Bank, Eurowire Containers Ltd, Flemings, Macphie of Glenbervie and Puratos Ltd.