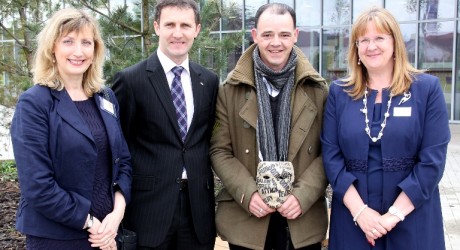 THE Minister for Public Health, Michael Matheson MSP, today (Thursday 29 May) attended the launch of a DVD, produced by members of an innovative suicide and self-harm prevention project available for men aged between 25 and 50 and living in Midlothian.

Midlothian Council is the first to commission this unique service, which Health in Mind hopes will be taken up in other areas.

Gwenn McCreath is chief executive of Health in Mind and she explained how the DVD – which is called ‘The Mask‘ – highlights some of the factors which contribute to thoughts of suicide and self-harm.

Said Gwenn: “The DVD draws on the experiences of the members of the project and almost everyone taking part in the film ‘The Mask’ as something they hide behind at times of emotional distress.

“The film shows scenarios where the need for a mask may develop and how circumstances can bring someone to the point where suicide can be seen as a realistic option.”

None of the members involved had any experience of filmmaking but they have tried to use the DVD to raise awareness of how difficult it is for an individual to express their feelings and highlight the support and help that is available.

Councillor Catherine Johnstone, Cabinet Member of Midlothian Council with responsibilities for Adult and Social Care, said: “We were delighted to welcome the minister to Midlothian for the premier of this important film.

“The Mask is groundbreaking as it shows mental health and suicide without hiding behind any closed doors and is an excellent example of raising awareness and erasing negative stereotypes.

“The Men’s SHARE project, a first for Scotland, is an excellent example of partnership working.

“Most importantly, it has improved the confidence and wellbeing of these men and kept them safe over the past five years.”

Michael Matheson MSP, Scottish Government Minister for Public Health, met some of the project members at a Choose Life event in late 2013 where he heard about the DVD.

Mr Matheson said:  “I was delighted to have been invited to attend the launch of this innovative new DVD developed by Men’s Share and local partners.

“I am sure it will be a valuable resource for supporting men who may be experiencing emotional distress and at risk of self-harm or suicide.

“The Scottish Government places a high priority on continuing to reduce the suicide rate in Scotland, as highlighted by the various commitments set out in our Suicide Prevention Strategy which I launched in December 2013.”

The National Records of Scotland (NRS), reported that there were 3,059 deaths from ‘probable suicide’ (intentional self-harm and undetermined intent) registered in Scotland between January 2009 and December 2012.

Health in Mind was set up in the 1980s and was formally known as the Edinburgh Association for Mental Health with the aim of taking over flats which were then rented for ex-patients by the Royal Edinburgh Hospital.

Today, the organisation still provides housing as well as many other services which include trauma counselling, befriending services, respite for carers, information services and community based services such as the Orchard Centre Services.

Based in the community, Orchard Centre Services operate throughout Midlothian from Bonnyrigg.

Funded by Midlothian Council, the service offers a wide variety of supports and projects which have, quite literally, changed thousands of lives. It is a one-stop shop: running nine projects, as well as also offering opportunities for volunteers and members to get involved in running the centre.

The SHARE (Suicide, Harm, Awareness, Recovery and Empathy) Project is just one of the Orchard Centre projects

SHARE started as a Midlothian pilot project, funded by Midlothian Council and its Choose Life suicide prevention initiative and it is delivered by Health in Mind in partnership with the Citizens Advice Bureau and is available for men aged between 25 and 50.

One of the important aspects of the project is that it can offer a comfortable environment that engages with men, several of whom were not using mental health services.

Some were fearful as they did not know how to discuss their issues or who to discuss them with or had been told there was little or nothing that could be done other than for some medication.

The project has been used on occasion to signpost to other appropriate services/agencies or helped to negotiate a route back.

SHARE aims to reduce risk by having weekly support groups in major population centres. It also has the potential to develop 1:1 support if the need is recognised.

The project focuses on prevention and intervention, providing support to promote resilience strategies and recovery pathways. It also offers an opportunity to engage in activities that promote a sense of purpose and belonging.

Many ‘at risk’ men have been supported through the project’s existence with the emphasis being on guiding to appropriate services at an early stage.

Individuals with the group are growing in confidence and are feeling more comfortable about sharing their emotional issues.

The project has seen men who have previously been extremely isolated, become involved in both general and targeted conversations.

The evidence indicates that the benefitsMidlothian men could be replicated throughout Scotland.

The evaluation report for the project is available here.