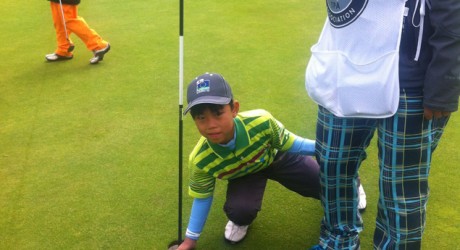 IT’S an achievement many professionals can only dream of, hitting a hole-in-one, but this week the dream came true for two seven year-old golfing prodigies.

The UK’s very own Luke Schmidt from Barnsley was the first player out of the 580 top players from across the globe to card a hole in one, ignoring his caddy’s (and grandad’s) advice on club selection before sending it home with one bounce.

Hitting the sweet spot on the opening day of the tournament (Tuesday 27th), Luke, scored his hole in one on the 91-yard, par three, 4th hole, on Longniddry Golf Course.

Thrilled mum, Claire Schmidt, said: “My husband and I were stood on the green waiting for Luke to take his shot and as it came up we knew it looked good. We then watched on in absolute amazement as it bounced once and dropped into the hole.

“Luke hadn’t been able to see the ball drop into the hole, but as soon as he heard our cheers he knew what he’d done. It was such a fantastic moment.”

She continued: “Funnily enough Luke had been discussing club selection with his granddad, who was caddying for him, who had recommended a 9-iron. Luke opted for his 8-iron instead and it proved to be an excellent choice.

“He jumped for joy when he arrived at the green and was over the moon that he achieved this at a younger age than his brother Ben – who got a hole in one at the age of nine, during the same tournament two years ago.”

The rising star from Thailand was clearly delirious, but remarkably managed to regain his composure to card a one under par, 35 shots, over nine holes and was sitting nicely in third place going into the final round. (Thursday 29th)

“There will be many golfers who will go near a life time without getting a hole in one so to have two seven year olds do it in the same tournament is truly outstanding. It just really reflects the quality and talent that exists among the young golfing stars of the future.

“I’d like to extend a huge congratulations to both boys from everyone at the U.S. Kids Golf Championships and wish them all the very best for the future.”

Record-breaking numbers of junior golfers from 44 different nations are taking part this year – with entrants travelling from as far away as Australia and Singapore to compete, reflecting both the growth and spread of junior golf around the world.

The tournament, now in its sixth year, is played over some of the most historical golf courses in East Lothian, including Gullane, Craigielaw, Luffness New and Longniddry.

The courses are modified for each age group in order to provide the same level challenge, meaning holes are progressively shorter as the age groups get younger. It ultimately allows the players to reach the greens in the same number of strokes as the top pros on the PGA tour.

The top finishers in each category will compete in the Van Horn Cup over Luffness New golf course on Friday May 30 – a showpiece event, modelled on the Ryder Cup, where the best European players are matched up against the top golfers from the rest of the world. The top five finishers in each age and gender group also automatically receive an invitation to the U.S. Kids Golf World Championships at Pinehurst Golf Club, North Carolina, at the end of July and beginning of August.

The U.S. Kids Golf Foundation, a Georgia non-profit recognized as a 501(c)(3) charity, was created in 2001 and provides services that include competition and instruction. The Foundation organizes more than 750 golf tournaments for kids each year with over 10,000 individual players ages 5-18. These tournaments include Local Tours in more than 50 cities, ten qualifiers across the nation, seven regional championships, a European and Malaysia Championships and the U.S. Kids Golf World Championship and Teen World Championship, which are held each year in Pinehurst, N.C.