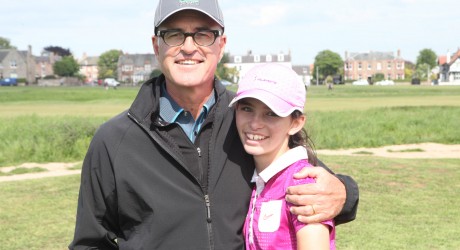 AN Oscar-winning Hollywood director is swapping the red carpet for the green grass of Gullane as he takes on a new role of ‘daddy caddy’ for his daughter as she competes in Europe’s most prestigious junior golf tournament.

Instead of rubbing shoulders with the likes of Meryl Streep and Jennifer Aniston – whom he has directed in his films The Devil Wears Prada and Marley and Me – David Frankel will be surrounded by 600 of the world’s greatest golfing juniors as he caddies for daughter, Phoebe, at the U.S. Kids Golf European Championships in East Lothian.

An avid golf fan and player himself, Frankel spoke of his love of the game and of Scotland’s ‘Golf Coast’.

He said: “This is the second year we have come to play in the championships and it is a fantastic experience for all the kids to get involved in as they are able to make friends with children from all over the world.

“The courses are exceptional and it is truly special for my daughter to be able to play in Scotland at the home of golf.

“Many golf competitions that Phoebe plays in don’t allow parents to caddy so this is a somewhat unique event. It really creates a special bond between parents and their children and it’s refreshing to see U.S. Kids Golf take a different approach to junior competitive golf.”

The U.S. Kids Golf experience has also seen David become a driving force behind The Short Game, an award winning Netflix documentary that profiles eight talented young golf kids as the look to make a mark in the sport.

David said: “The Short Game came about because my step mom came to watch my kids play at the U.S. Kids Golf World Championship in Pinehurst, North Carolina, and she was so attracted at the interactions and energy of the kids and their parents. She thought it was a really fascinating sub culture.

“She suggested to a producer friend that it might be a great idea for a film. He came down the next year to watch the tournament, and brought a camera man, and that’s how the film began.”

Hoping his daughter’s ‘got talent’, Phoebe is competing against a strong field in the Girls 12 category, played over Gullane No.3 Course.

The U.S. Kids Golf Foundation, a Georgia non-profit recognized as a 501(c)(3) charity, was created in 2001 and provides services that include competition and instruction. The Foundation organizes more than 750 golf tournaments for kids each year with over 10,000 individual players ages 5-18. These tournaments include Local Tours in more than 50 cities, ten qualifiers across the nation, seven regional championships, a European and Malaysia Championships and the U.S. Kids Golf World Championship and Teen World Championship, which are held each year in Pinehurst, N.C.

For more information or to register for the U.S. Kids Golf European Championships, visit www.uskidsgolf.com