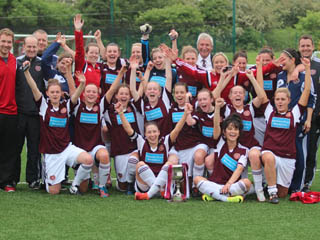 HEARTS Ladies added to their silverware by winning their divisional League Cup following a thrilling contest against Dunfermline Athletic – a side against whom they have consistently had tight contests.

In front of a packed stand at the Spartans Academy, in Edinburgh, goals by Coral Cassidy, Brogan Anderson and Dani Diey (from the penalty spot) were enough to see off a Pars side who – after equalising to make it 1-1, through Jane Doig – initially looked the more dangerous of the sides.

But two half-time substitutions were to prove crucial, following a first half where Hearts looked nervous and struggled often to do even the simple things, including releasing the ball quickly enough.

Not even a fifth-minute trademark goal from the cool, calm and collected Coral Cassidy – when she headed down a corner from the right – could relieve Hearts of their anxiety.

And although it took Dunfermline a relatively long 30 minutes before parity was eventually restored, it was only a matter of time before they did – Doig’s long shot taking a deflection so that the ball spun and arced over an airborne Jenni Currie, in the Hearts goal.

That said, although Hearts went into half-time interval fortunate that it was still all-square, they actually had enjoyed the clearer-cut opportunities in front of goal. Emma Stewart, released by a square pass from Gemma Mason, saw her shot, under pressure from two Pars defenders, bounce off the base of the right-hand post in the 23rd minute.

And just two minutes before the interval, a length-of-the-pitch charge down the left-flank by Sharon Hughes was thrilling but not properly capitalised upon.

As ever, Hearts were grateful for the courage and confidence of their goalkeeper, Jenni Currie.

And they were also glad of Stacey Hutchison’s flying header to divert a searing cross, by Kerry Finlay, from arriving comfortably for Doig.

And Hearts other half-time substitute, Demi-Lee Falconer, brought a degree of cleverness and quiet self-assurance which, on one occasion, in the 68th minute, saw her glide in from the left to unleash a shot which former Jambo, Jamielee Donoghue, in the Dunfermline goal, did well to push around the post.

In the 49th minute, it had looked like the nervousness of the first-half had not been shaken off at all – when a Hearts short-corner broke down so much that, instantly, Dunfermline were missing an open goal at the other end – but it was to prove a relatively unfounded fear.

Hearts had gone close to taking the lead in the 77th minute, but Dunfermline’s Judith Shepherd did exceptionally well to clear a Hughes’ header off her goalline. But five minutes later, they were not to be denied, Brogan Anderson getting the final touch in a goalmouth scramble following yet another corner.

And then victory was sealed when, in the 89th minute, Jodie Morris was adjudged to have fouled Stewart, in the 18-yard box. Showing no nerves whatsoever, Diey stepped up to dispatch the ball from the penalty spot.

Two years ago, Hearts won their divisional League Cup, when they were in the Second Division. This First Division trophy adds to an encouraging league campaign which will be reaching its climax towards the end of the year.