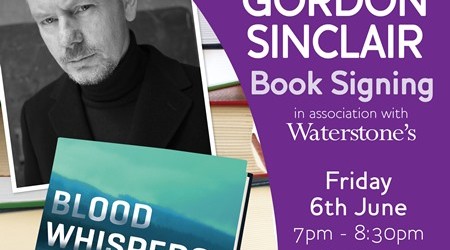 ACTOR and author, John Gordon Sinclair, arguably best known for his iconic lead role in Gregory’s Girl, comes to The Avenue Shopping Centre in Newton Mearns to launch his second book, Blood Whispers, at a free event organised by Waterstone’s at Primavera Bistro from 7pm till 8.30pm on Friday 6th June.

Born in Glasgow, Sinclair’s first film won him a BAFTA nomination for best newcomer to a leading film role while his first outing in London’s West End won him an Olivier award for best actor. His first book, 70 Times 7, also proved to be a massive hit and showed another side to the extremely versatile actor turned author.

In Blood Whispers, Kaltrina Dervishi is a prostitute on the run from Serbian gang leader Fisnik Abazi. The police want her to give evidence against him: Abazi wants her dead. Only her lawyer, Keira Lynch, can keep that from happening.

What Keira doesn’t realise is that this is a case with global repercussions and it’s not long before the CIA come calling. If Kaltrina talks and Abazi is imprisoned, then certain information will come to light – information that some will go to any lengths to keep buried.

What they don’t realise is that Keira Lynch isn’t your typical Glasgow lawyer. When she was eight years-old she killed a man and, as they’re about to find out, she’s at her most dangerous when threatened.

To book a space at this free event contact Waterstone’s or Primavera Bistro at The Avenue.