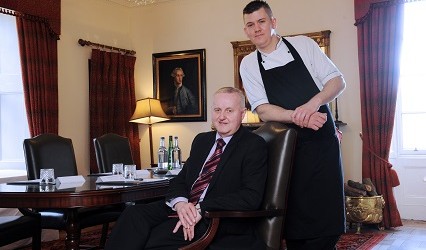 Graham Campbell has been named as executive chef and Martin McIlwrath as general manager of the luxurious venue which is located in 2,400 acres of rolling Aberdeenshire countryside in a tranquil setting which lies within easy reach of Inverurie and Aberdeen.

As a veteran hotelier with over 30 years of experience in the industry, Martin brings to the role a keen edge in the competitive tourism market and extensive knowledge of running destination hotels that pride themselves on the personal touch.

In 1992, Martin managed the initial change for Macdonald Pittodrie House Hotel from private residence to commercial hotel and his return to the venue is something of a homecoming.

Commenting on his new role, Martin McIlwrath said: “Macdonald Pittodrie House Hotel is part of the Macdonald Signature Collection, meaning that I inherit a premium hotel in a stunning location, with a reputation for quality and attention to detail.

“Despite the legacy in hand, we plan to build on the traditional values of the family hotel with a view to opening a new chapter.

“This is a hugely competitive market and we intend to expand on numerous fronts.

“We will capitalise on the estate land to renew our outdoor conference activities.

“We really want to personalise the conference experience and give it a whole new customer focus.  We already have a fantastic offering but it is about pushing that to a whole new level.”

Graham joins the team after a stellar career throughout the UK at locations such as the Caledonian Hotel in his native Oban and Ballachulish Country House Hotel where, in 2008, he became one of Scotland’s youngest chefs to be awarded a Michelin star.

His reputation as one of Britain’s rising gastronomic stars was sealed with subsequent stints at the likes of The Lake of Menteith Hotel and the Monastery in Manchester.

Graham Campbell said: “I don’t have a favourite ingredient, I will work with anything, seafood, all meats, anything. As long as it is good quality, I’ll find a way to bring something new to it.

“What matters to me is that we create a one of a kind hotel restaurant where people come to enjoy superb food.”