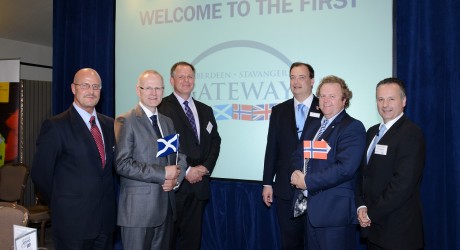 A COMBINED audience of more than 270 delegates took part in a new business event linking the cities of Aberdeen and Stavanger on Tuesday, June 3rd.

The Aberdeen-Stavanger Gateway has been hailed as a resounding success after taking place simultaneously in Aberdeen’s Marcliffe Hotel and Spa and the Radisson Blu Royal Hotel in Stavanger.

The two venues were linked using audio-visual technology and delegates in both locations enjoyed an impressive line-up of leading speakers, panellists and hosts.

In addition to providing the full range of PR services, host company, Granite PR, is known for creating networking events such as the now well-established Aberdeen-Houston Gateway.

Building on its success in 2013 and 2014, this new event offered an additional platform for knowledge sharing and networking as well as acting as a springboard to strengthen existing links between Aberdeen and Stavanger.

Commenting on the success of the inaugural Aberdeen-Stavanger Gateway, Granite PR founder and managing director, Brett Jackson, said: “Like many companies based in the North east of Scotland, we have experienced considerable growth in Norway in recent times.

“The creation of this new event serves to highlight both the synergies and differences between Aberdeen and Stavanger, whilst emphasising the opportunities that exist for all companies wishing to expand their presence in or knowledge of either location.

“This new event has been carefully timed to take place two months before the 40th ONS event in Stavanger and coincides with a number of companies choosing to establish or grow their presence in Aberdeen such as Statoil, Acona, DOF, NorSea Group and Wilhelmsen.

“By updating delegates on developments in key industry sectors in both locations including operator overview, drilling, subsea, marine, taxation and civic links we hope that the event will play a part in cementing existing relationships and lead to the formation of new ones.”

To find out more visit www.granitepr.co.uk To book a place call businessplus-scotland on (01651) 891790 or email bpscotland@btopenworld.com