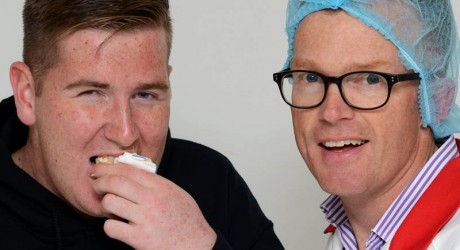 ASHERS Bakery has agreed a deal to sponsor Nairn athlete, Jason Maclean, during his final run up to this summer’s Commonwealth Games.

Jason commented: “I’ve had a great season so far reaching No1 in the UK for my classification, so it’s great that a local company has decided to help with my costs in preparing for the Commonwealth Games. I grew up in Nairn where everyone knows someone who works at Ashers so it’s great to have all these people supporting me.”

18 year-old Jason runs in the 100m and competes in the T37 class due to a disability. He has competed in the Middle East and the South of England in the past two months. With some excellent recent form he has now reached No.1 in the UK in his class and will hear soon if he has been selected for the Scottish Commonwealth Games Team in Glasgow.

The sponsorship deal will go towards Jason’s travel costs and training kit.

Alister Asher commented: “We don’t get many international athletes coming out of the Highlands so we’re delighted as a company to support Jason in his bid for Commonwealth glory. As the 2014 Scottish Baker of the Year, we are having a real run of success so it makes sense for us to sponsor a runner who is set for great things.”

Charlie Forbes who coaches Jason from High Life Highland was told about him by active schools co-ordinator Elizabeth MacDonald who had spotted Jason as a future talent when he was playing under-17 football for Nairn County. Charlie commented: ”Since Jason has switched from football he’s worked really hard and his natural athletic prowess has come to the fore, we have high hopes for him.”

Jason is now recognised as one of top prospects in the country for para-athletics, was selected for Scottish Athletics Youth Academy four-day camp at Tulliallan in April and was also invited to The British Athletics Parallel Success Academy in Manchester where he gets support from the top coaches in the country. He will use the Gothenburg Games in Sweden as a warm to the Commonwealth Games running in the Ullevi Stadium. He will be hoping to find success in the same stadium where Aberdeen FC won the European Cup-Winners’ Cup in 1983.

Ashers Bakery recently won the title of Scottish Baker of the Year 2014. The family-owned company has 14 shops across the Moray Firth area and also supplies various Scotmid and Spar and independent stores with bakery products. They were founded in Nairn in 1877 by the great grandfather of directors, Alister and George Asher.