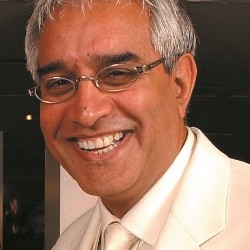 CHARAN Gill MBE, one of Scotland’s most-renowned entrepreneurs, has called for leadership and vision in the independence referendum debate, whilst expressing scepticism about politicians delivering on their promises.

“One thing has to be understood about the independence referendum is that when we vote for ‘independence’, we are voting for an independent Scotland, an independent country, and this does not necessarily mean personal independence. Change doesn’t guarantee a better way.

“We will continue to be governed by the same politicians within the same political system; a system that has failed to address and ignored the social issues of its majority for hundreds of years and protected the interests of the few.

“I am an undecided voter because, on one hand, I find the current political system to be corrupt and biased, not just in Britain, but across the ‘free world’, and, on the other, I fear once my emotional, patriotic euphoria subsides and the celebrations are over, I may have to deal with a hangover too great to be cured by a can of Irn Bru.

“I am all for change, for personal independence, for freedom and for equality, but these liberties cannot be achieved by people with the current political mindset. They may talk a new language, but the mould that made them is the same. Their thinking is restricted.

“How can I decide whether it’s an ‘aye’ or a ‘nae’ based on answers received to my burning questions in forthcoming debates, knowing full well that political promises are broken at a whim and policies written on White Papers tend to dissolve like words written with invisible ink?

“Scotland has an opportunity that few countries are fortunate to have; an opportunity to bring about real change, to lay foundations so strong that our future generations will be able to build upon them without fear of collapse.

“Are our leaders able enough? Do I believe they have the vision? Those are the only questions I need answers to. Give me something new to believe in Mr Salmond – please.”

Charan Gill is a former shipbuilder who founded his Harlequin Leisure Group in Glasgow in 1994 and built it into Europe’s largest chain of Indian restaurants before selling it in a multi-million pound deal in 2005. Following the sale of his restaurant empire, his next move was to pen his autobiography, ‘Tikka Look at me Now’ and star in the hit Channel 4 TV series The Secret Millionaire.