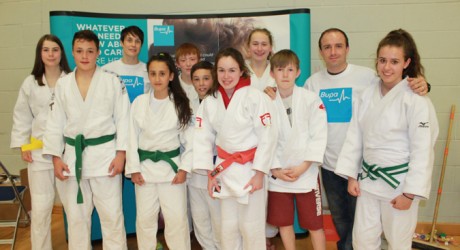 TWO of Scotland’s Commonwealth Games judo team – including a former Olympic hero – were in Motherwell at the weekend for the Bupa Charity Judo Open.

The event which took place at the Ravenscraig Regional Sport Facility was attended by John Buchanan, who was British judo team captain at the 2000 Sydney Olympics, and fellow Olympian, Sarah Clark – who were on hand to lend their support to the competition.

The driving force behind the Bupa Charity Open was Susan MacDonald, home manager at Bupa’s Golfhill Care Home in Dennistoun, Glasgow, who highlighted how the event is set to raise thousands of pounds for Children 1st, Scotland’s leading children’s charity, while helping to raise the profile of judo in Scotland.

“It was a wonderful opportunity to raise money for an important charity and to have the attendance of such well known figures from the world of judo.

“We hope to have the total amount raised for Children 1st finalised soon, but I know that they were delighted with the opportunity to promote their valuable work at the event, particularly through their social media channels.”

Susan explained that the sport runs in her family with her two sons actively participating in various judo competitions.

John Buchanan is one of three Scotsmen to win a World Championship medal and counts his role in the 2000 Sydney Olympics as his proudest moment. Similarly, Sarah Clark has also been a frequent Olympian – participating in the 2004, 2008 and 2012 games.

The Bupa Charity Open also featured an appearance from Pat O’Hagan, a Scottish judo legend who lives in South Lanarkshire, who – despite visiting the event by chance – created a stir among competitors and referees alike and was invited to hand out winners’ medals.

The event was split over two days encompassing ‘judokas’ from all backgrounds and age ranges.

Day one on Saturday 7th June, focused on the young generation with approximately 300 eight to 16 year-olds participating. This marked the first ever Children’s ‘Grand Prix’ event in the area – which is the official title for a certified Judo competition.

The second day of the competition on Sunday 8th June, featured the ‘Disabled Open’ – and also the open for Seniors and Masters.

This is the fourth year the Judo Scotland-sanctioned event – sponsored by Bupa Care Services – has been held and it has now established itself as one of the main competitions in the Scottish judo calendar.

Previous Charity Open events have been extremely successful, raising more than £35,000 for vital charities such as Marie Curie.