Media Release: Equator and Tennent’s bring the nation closer to the World Cup 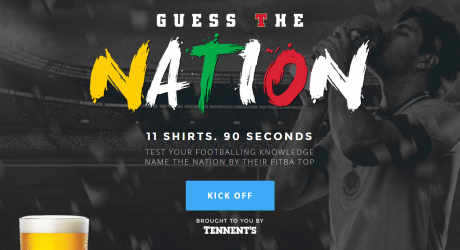 THE Tartan Army may be absent as the action kicks off in Rio, but Equator has teamed up with Scotland’s favourite lager to bring the nation closer to the World Cup.

The digital agency has created Guess the Nation in partnership with Tennent’s Lager for all those who think they know their ‘fitba tops’.

‘Guess The Nation’ is a multiple choice ticking-clock game, showcasing the colours of the 32 nations’ strips. With each play of Guess the Nation, the player has 90 seconds to name 11 shirts. Depending on your answer, each guess is followed by classic footage of the best goals or the worst footie fails.

Add in some sparkling Scottish banter and you really do have the country’s best representation at this year’s World Cup.

www.GuesstheNation.com was created by Equator developer Grant MacLennan and designers David Park and Ryan McLeod and is sponsored by Tennent’s Lager.

Paul Condron, marketing director at Tennent’s, said: “What a fantastic way to combine two great passions of our nation – football and the good old pub quiz. As excitement builds around the World Cup, ’Guess the Nation’ will go down a storm with Tennent’s fans and Scots in general.”