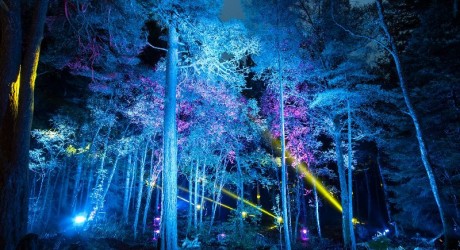 OVER 45,000 tickets have gone on sale this week for the multi, award-winning sound and light show, The Enchanted Forest, which returns this Autumn with its 13th event: elemental.

Tickets went on sale at the weekend and, already, organisers are predicting a sell-out show with demand already up 24.5 per cent on the same weekend last year.

Responding to burgeoning demand for the event that attracted a record breaking 40,000 visitors last year, organisers have this year extended the event’s capacity. In particular, they have added a popular twilight show option which was trialled in 2013 in response to the unprecedented level of demand for tickets.

“The twilight show is an excellent way to see the forest in a completely different light, arriving just before nightfall, and wandering around as the darkness sets in. Traditionally, it has only been seen by the team working on site, but last year we opened up Twilight departure times to the general public and they were immensely popular.”

The annual Perthshire Big Tree Country event was named Best Cultural Event at the Scottish Event Awards in 2013, adding to a raft of awards won over the last few years.

The 2014 show, elemental, sees the return of the creative team that put together the successful 2013 show, with lighting design by Kate Bonney and Simon Hayes, sound design and composition by RJ McConnell, and orchestral compositions by Jon Beales.

“Last year’s very successful creative team are back and very much brimming with ideas and plans to make this year’s event better than ever.

“The Enchanted Forest is always a challenge to reinvent the canvas, using the natural environment as our ever changing backdrop, but we have been working on some very exciting concepts for this year’s show which we are certain will deliver the wow factor that our customers expect from us.

“The theme is very much based on the power of nature, and we hope to bring the natural environment to life, showcasing the elements and giving visitors an unforgettable ‘back to nature experience’ with a twist.”

Tickets are now on sale to the general public. For further information please visit www.EnchantedForest.org.uk