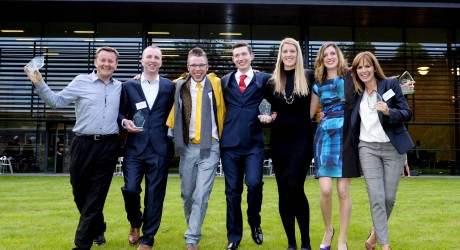 FOUR Highlands and Islands companies won a total of £173,500 last week in the fourth round of the Scottish EDGE competition.

The Scottish EDGE competition is designed to help innovative young Scottish companies to expand and grow by creating more jobs in Scotland and taking advantage of opportunities to move into international markets.

Five of the 30 finalists were from the Highlands and Islands: Coast & Glen from Inverness, Speyside Craft Brewery from Moray, MotoScotland from Argyll, Hebridean Spa from the Isle of Lewis and Kirsteen Stewart from Orkney.

Coast & Glen won £24,000 to grow its business through the purchase of new equipment to expand its production capacity, investment in new software to digitalise its processes and in improving its website.

MotoScotland won £50,000 to scale up its business through employing a new offroad motorbike training instructor, to improve its website, increase its marketing and sales capacity and to add more bikes to its stock.

Hebridean Spa won £50,000 to move the business into new UK spa markets, develop overseas markets, attend trade shows in the UK and abroad and move to larger premises in Stornoway to scale up production.

Kirsteen Stewart won £50,000 to grow her fashion design business into a global brand.

This will be through employing a graduate placement to undertake a dedicated sales role, attending trade shows in London and Paris, working with a and marketing specialist to extend the reach of the brand and increase volumes of stock to meet the growing demand for Kirsteen Stewart products.

Stephanie Anderson, development manager for entrepreneurship and innovation at HIE, said: “We are absolutely thrilled for the Highlands and Islands businesses who won at the Scottish EDGE awards. The standard of competition was very high and the companies from our region demonstrated once again that they are amongst the best in Scotland.

“Having winners from such a diverse range of businesses from the fashion, adventure tourism, natural skincare and fisheries sectors is a fabulous showcase of the innovation and talent we have across our area.

“HIE and our partners have been supporting these companies to develop and grow and we will continue to do so in the exciting times ahead as they expand further and move into international markets, bringing jobs and economic value to our region.”

Magnus Housten, founder and manager of Coast & Glen, said: “We’re absolutely delighted that the ten judges, who were all experienced businessmen and women, have seen the potential in Coast & Glen’s fishbox concept.

“The £24,000 awarded from EDGE means we are now well on our way to making our fishbox process more efficient, allowing us to scale up our factory equipment and computerise our processes to meet the growing demand we have from our nationwide fishbox customers.”

Malcolm Macrae is the founder of Hebridean Spa on the Isle of Lewis. The company produces a luxury skincare range called ishga using organic products.

He said: “First I had to do a Dragon’s Den style pitch in front of a panel of eminent businessmen. It was a three minute investment pitch followed by five minutes Q&A and I got through to the final. The final was down at the RBS Conference Centre in Edinburgh in front of 300 people from the business community in the audience, so it was quite nerve-wracking but I managed to hold my nerve for the ten minutes I was on stage.

“So I’m very pleased I was successful. It’s a really good boost for us. We were doing well as it was but this cash injection into the company is a welcome boost.

“We are now going to move into new, larger premises in Stornoway where we can scale up production and we are looking to recruit a full time sales person and to recruit more people on the production side of the products too.”

Clive Rumbold is the founder of Scotland’s first and only off road motorbike training centre at Inveraray in Argyll.

He said: “We are absolutely over the moon to achieve an award at this level, especially with only being open for one year.

“We are very keen to keep this momentum going by evolving everything we do to give our customers the best motorbiking experience of Scotland we can offer.”

Kirsteen Stewart is a surface print maker, retailer and fashion designer based in Kirkwall, Orkney.

She said: “I am over the moon to win the Scottish EDGE funding. It is a huge achievement and will enable us to employ further graduates, attend a trade show in London and Paris and develop new samples.

“The whole experience was great for me and my business from training, right through to the final pitch has given me invaluable skills which I will take forward for the future.”