Media Release: Prestige celebrates success on and off the pitch at the Stadium Experience Awards 2014 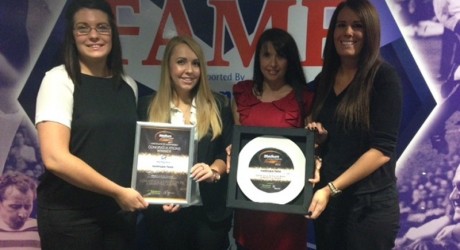 HOSPITALITY bosses at Scotland’s national stadium are celebrating after scoring their first gold award at a prestigious awards ceremony.

Sodexo Prestige, providers of catering at Hampden Park Stadium, scooped a gold award at the tenth annual Stadium Experience Awards in the “Conference and Events Sales and Marketing category”.

The awards, which recognise the dedicated efforts of industry staff working in catering, conferences and events in stadia across the UK were held on June 10 at the KC Stadium in Hull. Nominees were voted for by industry experts, club directors and members of the media.

But it was thanks to the Sodexo Prestige team who have been focusing their efforts on the entire customer experience from initial call right through to the event itself at the stadium, that they secured the coveted award.

Delighted Jane Thomson, sales and revenue manager with Sodexo Prestige at Hampden Park, explained how a great deal of time and effort has been spent on getting the team’s customer service to the highest standard possible.

She said: “We are thrilled to take home our first gold hospitality award, especially after such a strong emphasis on our sales team this year.

“Hampden Park is one of five main venues that Sodexo Prestige caters for in Scotland so we are extremely proud to represent the company standards as a whole through this award.

“Being recognised for our efforts at the stadium is just fantastic as we have invested a lot of time and effort in creating a service that ensures the best value for our customers and hope to continue improving our services throughout the year.

“Winning has also given our team a fantastic boost of confidence to strive forward with all aspects of the business in the year ahead in what is set to be an extremely exciting and busy time.”

The sales and marketing team at Hampden Park were judged in a mystery-shopper style telephone enquiry process with Newcastle United Football Club (NUFC), also winning Silver in the same category.

Jane added: “We’ve had a massive focus on calls this year as it’s the first point of contact for our customers. We want the entire experience from call to conference to run smoothly without any bumps along the way for our clients and this award is testimony to all the work we have put in.

“It’s also great to see Newcastle United also taking home the silver award as it shows how the teams at Sodexo Prestige are delivering such high standards across the board.”

In addition to the five Scottish venues, Sodexo Prestige is part of a larger network of 50 venues UK-wide, some of which also celebrated success in other categories at the awards.

The ‘Directors Choice’ award hailed The Amex as winner for the Gold prize, as voted by various club boards of directors when they attend an away match. Media attending matches across the UK awarded Brighton & Hove Albion Football Club with Silver.

On the announcement of these awards, Sodexo Prestige account director, Scotland, Amanda Brown, said: “We are extremely proud to be recognised across the board for our stadium management offering, from match day hospitality at Newcastle United to marketing and sales here in Scotland at Hampden Park.

“The fact that industry experts and potential customers voted for us also gives us that extra confidence as it is further testament to the hard work and superb service our teams deliver on a daily basis across the UK.”

Several of the Scottish chefs have also provided catering hospitality for The Open Championship, one of the world’s biggest golfing events that Sodexo Prestige delivers.