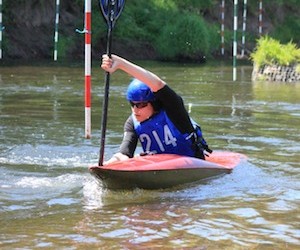 ROBERT Gordon’s College is celebrating after winning first place in the secondary school category at the Scottish Schools Slalom Championships at Alva in Clackmannanshire.

This is the first time the college has won in the kayaking competition after leaving with a commendable third place position last year.

Robert Gordon’s College Junior School continued the success when the team finished in third place in its category.

All pupils who competed in this year’s event are members of the Aberdeen Kayak Club.

Hugh Ouston, head of College, said: “The culmination of the year is always the Scottish School Slalom Championships and out of 20 academies in the North-east region, our winning team achieved an outstanding 8,571 points.

“We have committed group of pupils competing at Slalom events throughout the country. Students through the senior years also compete in division one, two, three and four, with many due to be promoted over the course of the year. We appreciate the work of the Aberdeen Kayak Club in developing the skills of young paddlers.”

Dr. Peter Shand who heads up kayaking in the college added: “The Hosie brothers, Ian and Dan have performed particularly well in division one, with Ian gaining first place. Robert Marsden competed in the north of England in division two and came home with a very credible sixth place.

“A huge thank you to Janet Peck, our coach, who has contributed many voluntary hours coaching the squad and without whom the success achieved at the championships would not have been possible.”

The win comes at an exciting time for the school in the lead up to the Commonwealth Games in July when two of its pupils, Saoirsa Stenhouse and Arron Kaminskas, will carry the baton through Danestone and Upperkirkgate respectably on 30 June.

The International Canoe Federation (ICF) has also announced that canoeing has qualified as a category two sport in the games, making it now eligible for inclusion with the possibility of it being listed as a sport at the event in 2018.