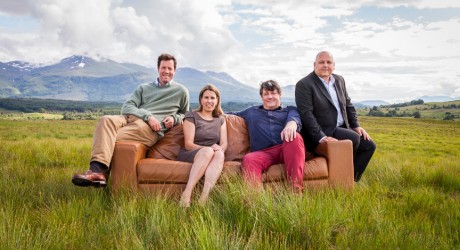 LOCHABER Chamber of Commerce and the team behind Lochaber Ideas Week, who made their debut in November 2013, are back for 2014 with an even more varied line-up of events and very attractive prizes for the winner of its entrepreneurial competition, ‘Dragons’ Glen’.

In a repeat of what was one of the most popular and innovative attractions of Lochaber Ideas Week 2013, Dragons’ Glen, inspired by the popular BBC business show, is a competition designed to stimulate the minds of aspiring and developing businesses seeking to operate in Lochaber, ensuring great ideas become a reality!

The competition is open to any budding entrepreneurs over the age of 16, with an idea for starting up or developing a business in Lochaber. Each entry will be carefully judged with the top six contestants being asked in turn to present their business plan to an audience and the judging ‘dragons’ on 6 October.

The three top contestants will then be invited to the final on 19 November, during Lochaber Ideas Week itself.

Finalists will be invited to pitch their plans to the expert panel, who will listen carefully, ask probing questions and pick a winner who will receive £1,000 worth of web design, support and hosting from Lamont Design, one year membership with Lochaber Chamber of Commerce and a £7,500 cash prize awarded by local charity the West Coast Communities Growth Trust.

The 2014 panel of ‘dragons’ include Angus MacDonald, Alasdair Ferguson, Anja Baak and Finlay Finlayson. See full background details of the Dragons below. There can be no doubt that to be a ‘dragon’ you have to recognise opportunity.

All of the 2014 ‘dragons’ understand that turning ideas into actions can lead to success. Their job is to judge who has the business idea worth backing in 2014.

Anne Widdop, of Fuze Ceremonies, praised the competition, stating: “The prize fund contributed to employing a graduate and has enabled us to develop a web-site which I could not have done without winning this event.”

With an even larger prize for the taking in 2014, the Dragons Glen is a fantastic opportunity for any budding entrepreneur operating in Lochaber the Outdoor Capital of the UK with either a viable and potentially profitable new business idea or looking to develop their young business.

There are outstanding speakers coming to the Outdoor Capital, not only from across the UK and Europe but also from as far as Namibia, to present at Lochaber Ideas Week! So, if you are interested in BIG ideas, join us and turn your ideas into success!

For more information on the Lochaber Ideas Week and the Dragons Glen, visit: http://www.ideasweek.co.uk

For images of The 2014 ‘dragons’ launching the 2014 Dragons’ Glen competition, set against the stunning backdrop of The Great Glen in the heart of Lochaber – The Outdoor Capital of the UK – go to https://www.dropbox.com/sh/6sz2vdbrk5dg88e/AADKoyozzJrlvlQtxoWIIsMoa

Angus MacDonald grew up in Glencoe and has strong family connections to Lochaber. Angus is a quiet spoken highland gentleman with a hard edge that has seen him succeed in the business world. Angus is passionate about Lochaber and as such has helped secure the £7,500 cash prize from West Coast Communities Growth Trust. Angus knows and understands money so if entering the glen make-sure you have the answers.

Alasdair Ferguson from Spean Bridge is at the helm of Ferguson Transport – trains, ships and of course the iconic fleet of Lorries. Ali is a Lochaber man to the heart with strong connections to Lochaber Shinty team; Ali knows all about success on and off the pitch and will only back the best idea in the Glen.

Anja Baak, originally from the Netherlands, has a family business that she set up ten years ago. Anja and her husband Jan Jacob live and work in the beautiful little Village of Roy Bridge, set deep in the rugged Scottish Highlands. The business Great Glen Charcuterie source the best Highland produce and distributes globally. Through innovation and dedication, Anja is sure to bring spice to the Glen.

Finlay Finlayson, back as a dragon for the second year. Finlay is a well kent face on the West coast of Scotland his passion for the ‘Outdoor Capital’ and all thing Highland are beyond question. Finlay owns the world class Underwater Centre in Fort William and Tasmania along with the other businesses in the area.