Media Release: Show Home of the Year likes to be beside the seaside 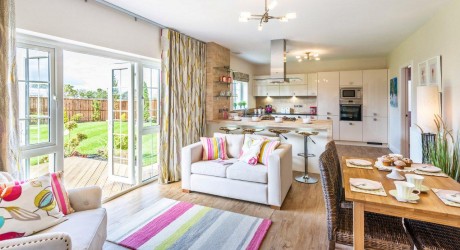 THE quality of life in Scottish seaside town North Berwick has won it a host of awards – now it has also landed another accolade after inspiring a showhome celebrating life on the coast.

CALA Homes created the Gilsland Grange development in the East Lothian town by transforming a former caravan park. It includes a ‘raspberry ripple’ themed property which has just (JUN) been named Scotland’s Showhome of the Year.

Now that showhome is providing a perfect insight into the benefits of life by the seaside, as CALA releases the final seven homes to the market, which will complete the development of 37 substantial four and five bedroom family properties.

Sarah Stanger, sales and marketing director at CALA Homes (East), said: “East Lothian consistently comes up as one of the finest places to live in the UK and North Berwick is the jewel in East Lothian’s crown.

“So we had no doubt that developing Gilsland Grange was a rare opportunity to create homes fitting for a town that so many people agree is an amazing place to live.

“When it came to creating a showhome we were determined it should properly reflect everything that this part of the world has to offer – not just fish and chips for which the town is famous or ice cream on the beach, but all the colour and character of living on this lovely stretch of the coastline.”

The CALA team worked with interior designers from Luma in South Queensferry, near Edinburgh to make sure the five-bedroom MacRae property gave visitors a real flavour of life by the beach.

The design which  took inspiration from the coastal location, with pink and cream ‘raspberry ripple’ tones used in the living areas, coastal landscapes framed on walls and turquoise combined with sea blues and seagrass-style carpets to complete the seaside feel.

Joanne McDonald, director at Luma Interiors, said: “The beautiful beach is such a dominant feature of North Berwick and gives the town a wonderful feeling.

“In our design we wanted to evoke this with impressions of endless summers, sweet shops, raspberry ripple ice-cream, picnics, tea rooms and long happy days.

“We used fabrics that hinted at the patterns in the goodies to be found in an old fashioned sweet shop, and textures of woods and metals reminiscent of materials found at the beach – driftwoods, distressed metals and shells.

“Tea-shop florals and textured tiled flooring to hint at sand underfoot and coastal scene artwork all helped bring the schemes to life.”

A major feature of the properties are the gardens, with views to the famous hill, North Berwick Law, which looms over the seaside town. The showhome garden also comes with its own putting green, a homage to the legendary Links golfing heritage of East Lothian, which makes it a magnet for players from all over the world.

CALA Homes, the UK’s most upmarket major homebuilder which is headquartered in Scotland and employs 600 people. Its reputation was earned on the high quality of the homes it builds in developments which are sensitively designed to augment the areas in which they sit. The result is that its homes are not only highly sought after, but retain their value over decades and earn loyalty from owners, who often live in a series of CALA properties.

Gilsland Grange has attracted buyers from Edinburgh and beyond, many lured to the town by the quality of life, unspoilt coastline, top-notch schools and excellent commuter links to Edinburgh, just 25 miles away.

The final phase has just been released to the market available from £565,000 and with only seven homes remaining this is the final chance for buyers to secure a home in this sought-after location.

Sarah added: “We hope many more house hunters will take this as a prompt to visit our show home and see why CALA Homes are so prized by the people who live in them and why North Berwick has such an outstanding reputation.

Find out more at http://www.cala.co.uk/homes/development/Gilsland_Grange/

CALA Homes, part of the CALA Group, is the UK’s most upmarket major home builder operating in the South of England, the Midlands and Scotland. The company focuses on high quality, well-designed homes in prime locations, from starter homes to luxury detached family properties.

At the end of March 2014, CALA acquired Banner Homes, a leading developer and retailer of luxury new homes in the affluent markets of the Midlands and the South East of England. The combined company will be a Top 10 UK home builder building predominantly family homes in premium locations in the South of England, the Midlands and Scotland.

Issued on behalf of CALA Homes (East) by Holyrood Partnership. Further information on 0131 561 2244 or info@holyroodpr.co.uk