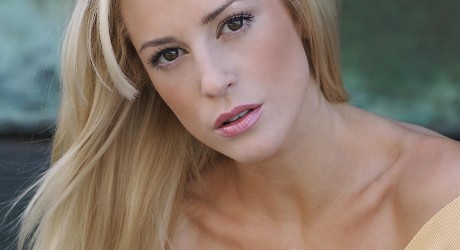 Within minutes of being introduced on the set of Serial Daters Anonymous, the pair were forced to lock lips as part of an important scene which took ten takes to get right.

Edinburgh-born Louise, who moved to Hollywood eight years ago, landed the lead role in the romantic comedy, which is due for cinema release in the US at the end of the year and in the UK in early 2015.

She said: “I loved working with Sam Page who played my love interest and he’d just finished a great role on House of Cards with Kevin Spacey.

“However, our first scene together was a bit awkward as it involved a long passionate kiss.

“It’s quite intimidating meeting someone new then being lip-locked for ten takes. Kissing a stranger is unnerving and frankly, scary, but Sam is so charming and talented all our scenes together were raucous good fun.”

In the movie, Louise plays Claire, a fashion columnist who jilts her cheating husband-to-be at the altar and embarks on a dating spree with one aim – to wage revenge on the entire male gender and which sees her labelled a ‘dating vigilante’.

However, her plan hits a complications when she reconnects with her first love Kyle, played by heart throb Page. The movie, billed as an all-American rom com in the style of Runaway Bride meets This Means War, was filmed in Page’s home state of Wisconsin.

The chiselled actor is no stranger to kissing blondes on camera after starring as the handsome professor who captured Serena van der Woodsen’s attention in hit series Gossip Girl in 2010. He has also appeared in Mad Men and Desperate Housewives.

The comedy role caps a busy year for Louise, who has also just completed filming a part in the eagerly-anticipated biopic of Howard Hughes, which is being directed by Tinsel Town legend, Warren Beatty.

In August, she will film the female lead in Echo Effect a political action thriller set in Louisiana, while she is being tipped to star in the remake of a major classic horror which will film in the Winter 2014 and be released in cinemas internationally in 2015.

In April, she was in New York as a speaker at the KILTR televised debate on the Referendum, while May saw her jet into the Cannes Film Festival, where she was at the Vanity Fair party with 100 Hollywood movers and shakers, including Cate Blanchett, Jennifer Lawrence and Naomi Watts.