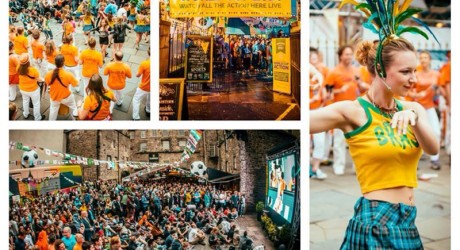 STAFF from one of Edinburgh’s busiest bars are on the edges of their seats ahead of tonight’s World Cup match as a win for their favoured Brazil could leave them having to legally change their names.

Thirteen members of staff at The Three Sisters in the Cowgate have bravely agreed to change their names by deed poll in honour of footballers from the Brazilian team- should they lift the World Cup.

Sharon Norris, or Hulk Norris should Brazil win, is the sale and events managers at the bar and is starting to realise how possible the name change could be after tonight.

She said: “I really can’t believe how well Brazil is playing and tonight could be one step closer to me saying goodbye to Sharon and hello to Hulk.

“Every time they’ve scored so far, I’ve been getting that nervous feeling in the pit of my stomach. I guess it’s now truly sinking in that we might be calling each other new names in a matter of weeks.

“It’s been a great atmosphere though throughout all the matches, especially when Brazil play and we all can’t wait to see the result tonight.”

With Brazil being the hot favourites to win since they kicked off the first match of the games on the 12th June, it has become a very real possibility that the staff at the Three Sisters will have to follow through with their daring deal.

After putting in a sterling performance in last week’s knock out stages and with steady, promising odds throughout the tournament, Brazil have now reached the quarter finals and are due to play Colombia tonight (July 4).

Sharon added: “Every game night we’ve had hundreds of punters come and watch the matches live and I think tonight is going to be even more electric with us coming one step closer to the possible name change.

“Tonight’s quarter-final will be a real nail biter for the staff, especially if they get through to the Semi’s but I guess if they play well, I’ll just need to get used to being called Hulk.”

The Three Sisters will continue to show every match on their 200” LED TV screen with plans still in progress for the World Cup closing ceremony.