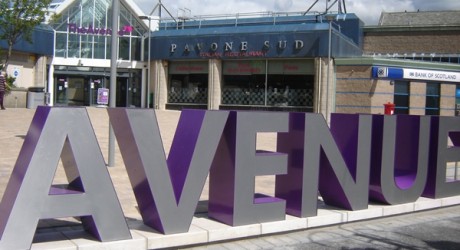 PUT the date in your diary: the Avenue Shopping Centre in Newton Mearns will play host to the Queen’s Baton Relay on Wednesday 16th July.

Amongst a day packed full with free, fun festivities, The Commonwealth Youth Circus will present two performances to mark the opening of The Avenue’s new public realm space, together with walk-rounds and workshops around the shopping centre throughout the day.

There will be two baton bearer changeovers on the day at The Avenue, with one of the bearers being Russell Macmillan, a local blind, double transplant recipient who established East Renfrewshire’s Good Causes, The Avenue’s nominated charity.

Michelle McCabe, Centre Manager at The Avenue, said: “Wednesday 16th July 2014 promises to be a day like no other has ever been at The Avenue!

“An all-day event, it starts off with the Queen’s Baton Relay arriving in the mall at 9.45am, followed closely by the first ever event in our new public realm space with a 10am performance by The Commonwealth Youth Circus, featuring everything from acrobats, stilt walkers, clowns and jugglers.

“Without a doubt, The Avenue offers one of the best places in East Renfrewshire to come and see the Queen’s Baton Relay on this historic day.”

Amongst the host of free entertainment put on for shoppers in and around the mall that day are: a competition offering a chance to win four premium Opening Ceremony Tickets for the Commonwealth Games, as well as a range of giveaways and freebies throughout the day, in conjunction with official sponsor AG Barr; free face painting, balloon modelling and candyfloss; hook-a-duck activity and Glasgow Science Centre Fit Labs in the mall.

Popular mall mascots Newton and Fearn will be out and about in the mall throughout the day. The all-day event lasts from 9.30am till 4pm with the Queen’s Baton Relay arriving in the mall at 9.45am and performances from The Commonwealth Youth Circus (a company made up of young people from across Scotland and the world established to support the Queen’s Baton Relay with pop-up performances across Scotland as part of the Glasgow 2014 Cultural Programme) at both 10am and 3pm.