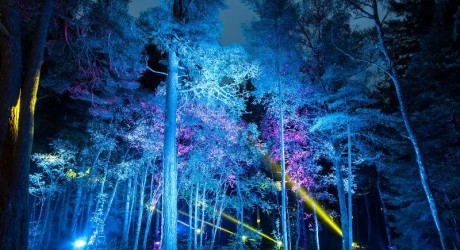 THE Enchanted Forest, one of Scotland’s premier sound and light shows, has been shortlisted for three titles in this year’s prestigious Scottish Event Awards, which will see it battling out again for its place at the top against some of Scotland’s most popular events.

This year the event will compete for the titles of Scotland’s Best Cultural Event, which it has won twice, and Best Large Event, while its agency, Volpa, has been shortlisted for Best Marketing Strategy, a title which it too has previously won and received several commendations.

Founded in 2002 with just 3,000 visitors attending in its first year, the event now attracts more than ten times that number of visitors with over 40,000 visiting the 2013 show, Absorb.

The Perthshire event has become a mainstay of Scotland’s tourism calendar and tickets for this year’s show are already selling 35 per cent faster than in 2013, leading organisers predict yet another record breaking year.

Derek Allan, producer of The Enchanted Forest, said: “This is excellent news and we’re delighted that the event has been shortlisted in all three categories.

“Highland Perthshire Community Interest Company has always pushed the boundaries with this event, delivery several record breaking years, and entertaining tens of thousands of visitors. It’s very rewarding to see that the hard work and commitment of a small rural community can comfortably compete on quality, scale of event and creativity with other major events across the country.

“Every year we set out to make the event better than the previous year and this is the magical ingredient to the event’s continued success. Being shortlisted for such prestigious awards is testimony to the talent we have in the team, from the stewards to the designers, from the lighting engineers to the box office staff.”

The winners will be announced at a glittering awards ceremony due to take place in Glasgow on Thursday 8th October, just five days after this year’s show has opened to the public.