Media Release: Dearest Scotland – a project capturing the future of the nation in letters 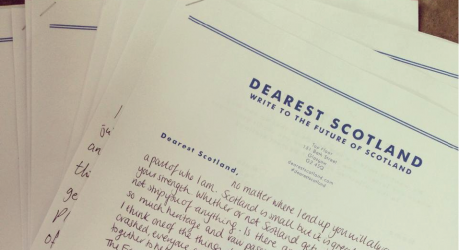 WHAT sounds like an archaic sentiment in a digital age has sparked a revival in letter writing thanks to a project by the name of Dearest Scotland.

The apolitical initiative has caught imaginations in the year of the independence referendum by inviting letters and illustrations from people of all ages across the world with a connection to, or vested interest in Scotland.

Focused on crowdsourcing from a widest possible demographic with the aim of giving a platform to citizens’ voices, Dearest Scotland’s co-founder, Sarah Drummond, recently spoke of the aspiration to receive handwritten letters that capture insights to what a future Scotland may look like.

Sarah said: “Our team at Snook work in grassroots communities and we hear great ideas everyday from ordinary people. Sadly, there is no platform for these voices to be heard in the mainstream media, by governments or local authorities. Dearest Scotland aims to address that.”

For an idea that originated before the independence referendum was announced, since its official launch in March of this year, Dearest Scotland has received a cross-section of letters keen to articulate visions that reach beyond the political debate of the September 18th vote.

While the project proves that the art of letter writing isn’t dead, also provided is the choice to write and illustrate letters digitally via the Dearest Scotland website.

Not resting on their laurels in merely collecting letters with no outlet for exposure, Sarah also spoke of the plans to publish received letters in a collated book format.

She said: “Everyone who writes to Dearest Scotland has the chance to see their letter published. This allows for the opportunity to read what people of all ages from every part of the country have to say about their hopes and fears for a future Scotland both in connection to and outside of politics and the referendum.”

While new letters are catalogued daily, Sarah’s aim is to publish the visions in an open source digital catalogue – in addition to the book format – post 13th September 2014, the deadline for submissions; all proceeds of which will be donated to new and existing Scottish literary projects.

While the Dearest Scotland team embark on a summer tour of Scottish venues and events, keen to reach out to towns and rural areas, the initiative has caught the attention of politicians. MSP for Glasgow Anniesland, Bill Kidd, in June lodged a parliamentary motion in support of the project.

Given a debate date of 13th August 2014, the motion has received cross-party support from a further 25 members of the Scottish parliament.

There are also plans to exhibit a display of letters by the Scottish Rural Parliament in November and within Holyrood in early 2015.

Of the letters received, Sarah’s business partner and project co-founder, Lauren Currie, added: “We all have a box of letters stashed away somewhere that fill our hearts with joy every time we dig them out and reread them. Dearest Scotland is our nation’s box of letters. These letters are so much more than communication, they are re-imagining the future of Scotland.”

To find out more information about Dearest Scotland’s project, summer tour, or to submit a future vision of Scotland, visit…