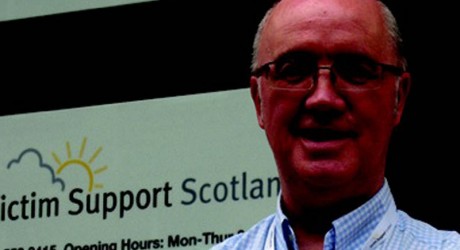 VICTIM Support Scotland volunteer, Bobby Pollock, has been chosen as a batonbearer on one of the final stages of the Glasgow 2014 Commonwealth Games Queen’s Baton Relay, crowning his 30 years of voluntary work for his home city.

Bobby, 58, of Croftfoot, Glasgow, who retired recently after 40 years working in housing, 20 of them with the Maryhill Housing Association, will carry the baton on Tuesday, July 22, in Castlemilk where he was a City Council housing officer for many years.

Bobby has been volunteering since 1984 when he started with the Children’s Panel with which he served for 17 years and is now a valued member of Victim Support Scotland’s Glasgow team of volunteers working with both the Victims Service for victims of crime and the court-based Witness Service helping those attending trials.

“I was a witness to the stabbing of a friend of mine when I was 18 and since then I had always been interested in crime and its effects on victims,” said Bobby.

“When I retired I got the chance to increase my voluntary work and Victim Support Scotland was exactly what I wanted to do. I applied, did the training in the autumn of 2013 and I thoroughly enjoy it.

“I’m a great believer that you get a lot out of helping people and I have certainly got a lot out of my 30 years of volunteering.”

He has also given his time over the years to his local Crime Prevention Panel, Neighbourhood Watch, Croftfoot Primary and King’s Park Secondary school boards, Citizens Advice and is a SACRO-trained mediator for housing and neighbour disputes.

He served as a volunteer with the London 2102 Olympics for the football competition in Glasgow and has also been chosen as a Host City Volunteer for Glasgow 2014 helping to meet and greet visitors to the city for the Games.

Bobby, and wife Jill have been married for 37 years and have two sons Craig, 27 and Ross, 23, and he was nominated as a batonbearer by Craig.

He said: “It’s an absolute and humbling honour to know I am representing the Queen and carrying this baton that has gone all over the world to 71 countries.

“I have checked out the route onCastlemilk Roadand am glad it’s all downhill, because it’s steep!

“For me, this is about the ordinary people of Castlemilk getting a chance to see and be close to the baton. It’s great that the Games are coming to my city.

“I know people whose lives have been transformed by the Games, particularly in the legacy of housing, and if they make a difference, even a wee one to a kid in Castlemilk, that’s a great thing.”

Billy is one of a number of VSS volunteers who are also giving their time to the Games. Isabella Devine, 65, of Newton Mearns, a VSS volunteer for 12 years, and James Haig, 72, of Kilmarnock, Ayrshire, who has been with the charity for  eight years, are both taking part in the opening ceremony at Celtic Park as cast performers.

Pauline Lowe, 51, of Burnside, Glasgow, a volunteer for 12 years with the VSS Witness Service, is acting as a driver, ferrying guests to and from venues.

Rosemary Jamieson, from Glasgow, who has been with VSS for four years, was a ‘front runner’ with the organising group interviewing and training volunteers for the Games, while Andrew Jordan, 74, of Cumbernauld, who has spent ten years with VSS, is helping out as a meeter-and-greeter for Glasgow City Life, welcoming visitors to the city.

Note: a free to use picture of Bobby Pollock is attached and is also available from David Sinclair.

The service is free, confidential and is provided by volunteers through a network of community-based victim and youth justice services and court-based witness services.

The charity helps around 200,000 people year affected by crime.