Media Release: Young chef fires up the kitchen with his unexpected culinary skills 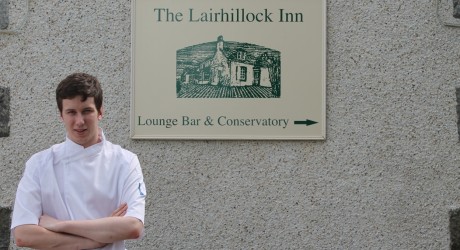 THERE’S never a dull moment in a busy restaurant kitchen and timing is crucial when it comes to perfecting the ideal dish for diners.

So when 19 year-old, Andrew Junnier, was put to the test by his head chef, his unexpected flair for cooking came as a surprise to everyone.

Andrew, who has worked at the Lairhillock Inn restaurant, in Netherley, near Stonehaven, for five years, originally began his culinary career as a kitchen porter at the age of 14.

Unlike most chefs who are born with a passion for all things food and drink, Andrew’s love for his craft only developed when he was given the opportunity to try out his culinary skills in the kitchen.

Andrew said: “When I first started working at the Lairhillock Inn as a kitchen porter, I didn’t think I would end up finding a long term career out of it but when I was given the chance to try some cooking, I quickly realised I really enjoyed it.”

The Lairhillock Inn, a family-run restaurant, which is renowned for its home-cooked local favourites and Scottish classics, recognised Andrew’s abilities and offered him a role as commis chef after he left school at the end of fifth year.

However, Andrew didn’t expect to see himself back in a classroom so soon, but manager of the Lairhillock Inn, Donald Law encouraged and supported Andrew to attend an one-year Professional Cooking course, which he has recently completed, and secured his level three qualification.

Whilst attending the course at the Aberdeen College one day a week, the young chef continued to work five days a week alongside the team of five at the busy restaurant.

Andrew said: “Working and studying at the same time was hard but I knew it was important and it has taught me a great deal of different skills and techniques with pastry and also various starter, main and vegetarian dishes.

“The characters I work with keep the kitchen alive with laughter and make working each day fun so I quickly forget about the long and tiring hours.”

The young aspiring chef is encouraged to put forward his innovative ideas to enhance the menu whilst remaining true to the traditional Scottish roots of the restaurant.

One of Andrew’s most recent additions to the menu is the BLT burger, which is quickly becoming a popular choice with guests.

“The opportunity to get my own dishes on the menu really motivates me to get creative in the kitchen, and it’s great to hear that the customers are enjoying my creations.

“In my time at the Lairhillock, I have learned a lot from the head chef and other members of the team, which has undoubtedly helped me to become a better chef.

“However, I still haven’t found out the secret recipe to the famous sticky toffee pudding yet.”

Time off is precious to Andrew as working in the hospitality sector usually involves working unsociable hours, but having a job he loves just around the corner from his home is ideal.

He said: “My days off change every week, so it can be hard sometimes to see my friends on set days, but I make it work and it’s a small price to pay when you have a great job with a good team behind you.

“I’m always kept busy in and outwith work so it’s a good balance that works for me, I love being in the kitchen.”

The future is looking bright for the ambitious chef and he is aiming to progress to the next step up in the kitchen.