Media Release: Running Into Me, from New York 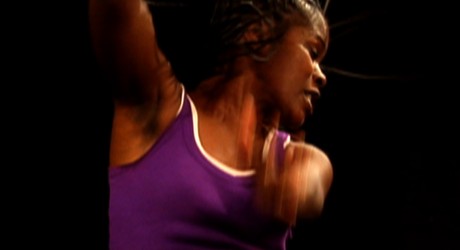 You can run away, but wherever you go there you are…

PLAY Solo (New York, USA) presents the European Premiere of Running Into Me, a compelling story of one woman’s remarkable struggle to break free from a misguided upbringing on the streets of LA, at the Edinburgh Festival Fringe 2014.

It will be staged at Underbelly Cowgate from Thursday 31 July to Sunday 24 August (not 11 Aug).

The European Premiere of Running Into Me

A phone call from home sends Vickie Tanner on a whirlwind tour of her life; from the drug and prison culture of her youth in Compton, Los Angeles, where most of the men around her served time and her family ridiculed her for choosing education, to the determined pursuit of a more fulfilling life as an actor in New York City.

Ultimately, this riveting journey of both tragedy and triumph leads her back to where she came from. You can run away, but wherever you go there you are…

In this incredibly physical production, Vickie takes the audience on a roller coaster ride into the minds of young people, simultaneously painting a vivid, insightful and deeply personal portrait of her own odyssey-like journey where she defined herself and defied the odds.

Playing 15 different people she brings to life many of the characters from her troubled past exploring the themes of family, fear, courage, teen rebellion, social responsibility and most importantly, love.

Running Into Me was one of five unconventional solo plays chosen for the inaugural ‘a series of one’ festival at LaMama in NYC in 2013. In February 2014, Running Into Me played to a sold out house and a standing ovation at Whitefire Theatre in Los Angeles.

Link to print-quality images and media information on Dropbox: https://www.dropbox.com/sh/cqtliszfm926sfv/AADj-dvJgpkbeCg52Dk9b-Pra