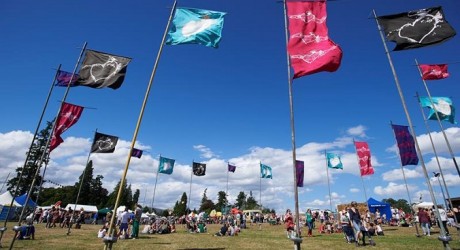 THE University of the Highlands and Islands is inviting Belladrum goers to find out more about their local university with the unveiling of its festival programme.

Students, staff and graduates will be helping to run a range of fun activities, topical debates and musical performances over the course of the weekend.

To embrace this year’s theme of wildlife, the university is joining forces with TV presenter, explorer and marine biologist, Monty Halls.

Monty will be encouraging kids to find out more about the types of animals that live in water, on the shore and in forests with a Creature Scavenger Hunt.

The hunt will take place at the university’s beach which is being especially designed for Belladrum and will be located near the Verb Garden tent.

Other science themed activities include a ‘Born to Be Wild’ show where the university’s ‘mad scientists’ will demonstrate how much fun can be had with water, some mild explosives and a lab coat and a ‘Creature Feature’ craft session where children can create their own creatures and think about why animals look the way they do.

The university’s ‘guerrilla scientists’ will also be conducting fun, interactive experiments at the university beach and around the festival site.

For those who enjoy getting creative, artist Adrian Eaton will be encouraging festival goers to help make a ‘bio-art attack’ using organic materials like shells and seaweed. Based at the university’s beach, Adrian will also be capturing time-lapse footage of the emerging sculpture.

As the sponsors of this year’s Verb Garden, the university is also involved in a number of topical debates. Honorary Professor Des Thomson will take part in a discussion about the killing of red kites and buzzards in Ross-shire; music lecturer Peter Noble will be part of panel discussion for unsigned bands and honorary fellow and fashion designer, Sandra Murray MBE, is taking part in a ‘Size Matters’ body image talk.

Festival goers will also have the opportunity to see the premier of a brand new Scottish musical before it heads to the Edinburgh Fringe. Written by graduate Finn Anderson, ‘Alba’ tells the story of a young man whose reluctant return to rural Scotland sparks an emotional rollercoaster of self-discovery. The show will premier in the Venus Fly Trap Stage at 3:15pm on Friday 8 August.

Completing the university’s musical performances will be Rhythm Wave, an energetic samba band made up of students, staff and alumni from Perth College UHI. Rhythm Wave will take to the Venus Fly Trap Stage at 9:30pm on Saturday 9 August.