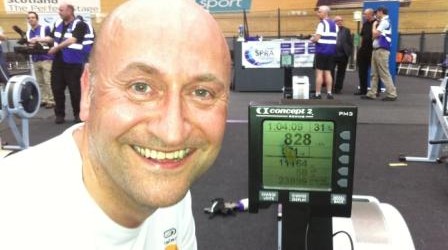 FIFE Chief Inspector, Ross Bennet, has raised £745 for charities close to his heart – children’s football team Cairneyhill Athletic and Epilepsy Scotland – when he and 213 teammates of Police Scotland officers and staff, supported by the Scottish Fire and Rescue Service, set what they hope is a new world indoor rowing record.

The achievement was set in the Emirates Arena in Scotstoun Sports Campus, Glasgow.

Proving he was fit for the challenge, Ross with his sporting colleagues recently rowed non-stop for an hour in an attempt to break the group indoor rowing world record previously set by 191 people.

The Guinness Book of Records has been asked to verify their achievement.

Proud to have been part of this challenge, 43 years-old Ross explained: “Trying to bust the world record was something I wanted to do anyway. It also seemed a good way to raise sponsorship money for two charities that mean a lot to me.

“I’m involved with a local kids football team Cairneyhill Athletic and I enjoyed doing this sporting activity to help them.

“I also have epilepsy and this way I could fundraise for Epilepsy Scotland and for the services they provide. I want to thank everyone for their generous support.

“Some doubters thought an old guy like me wouldn’t make it!”

“He raises awareness as well as funds. So we think he’s a world champion for the many things he does for epilepsy.”

1. Photos are available of Ross Bennet competing at the Emirates Arena in Scotstoun, and wearing his medal for taking part in this sporting achievement.

2. Epilepsy Scotland works with people living with epilepsy to ensure that their voice is heard. We campaign for improved healthcare, better information provision and an end to stigma. This common serious neurological condition affects one in 97 people. We represent 54,000 Scots with epilepsy, their families and carers. Our freephone Helpline (0808 800 2200) offers support and information, text 07786 209501, email: enquiries@epilepsyscotland.org.uk, find us on facebook, twitter @epilepsy_scot twitter or visit: www.epilepsyscotland.org.uk