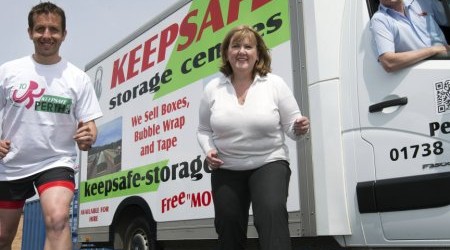 LOCAL fundraising hero, Alan Glynn, who set up a charity fund in memory of his daughter, Alexis Rose, is racing towards his £100,000 fundraising target at this year’s Perth 10k race on Sunday 31st August.

Alan’s daughter, Alexis Rose, was only 19 months-old when she died, very suddenly, of Meningitis in 2011.

Both he and his family decided to continue Alexis’ fight by raising money for the charity Meningitis Now.

Formed in 2013 by bringing together Meningitis UK and Meningitis Trust, Meningitis Now’s goals is to save lives and rebuild futures by funding research, raising awareness and providing support. Alan and his family have been great supporters of the cause since Alexis death.

The fund, well-known locally as the Alexis Rose Fund, recently had its name changed to The Meningitis Family Forever Fund, a decision by Alan and his family to show how their fund has grown over the years.

When asked about his decision, Alan said: “The fund has become a big group, a family, a force of amazing people that work hard to raise awareness and funds and help each other meet targets. I am very proud of this. Very, very proud. We are very much a Big Family.”

Since starting the fund in 2011, the Meningitis Family Forever Fund has held many events including charity walks, football matches, pub quizzes and race nights which have brought the total raised so far to over £92,000, close to meeting the ambitious £100,000 target.

Alan and his team of fundraisers will be taking part in the 2014 Keepsafe Perth 10k in an attempt to reach their goal and when asked why he made the decision to take part in this event he replied: “I have chosen the Perth 10k because Alexis Rose was born in Perth and sadly lay to rest here. It’s Alexis’s home town and I’m urging fellow local citizens to get involved, help us meet our target and enjoy the day.”

The Keepsafe Perth 10k will take place at 11am on Sunday 31st August and the race will start on the North Inch outside Bells Sports Centre. To register for the event visit www.perth10k.co.uk.

To find out more about Alan and the Meningitis Family Forever Fund, visit their fundraising page https://meningitisnowforeverfunds.tributefunds.com/AlexisRoseMeningitisUK